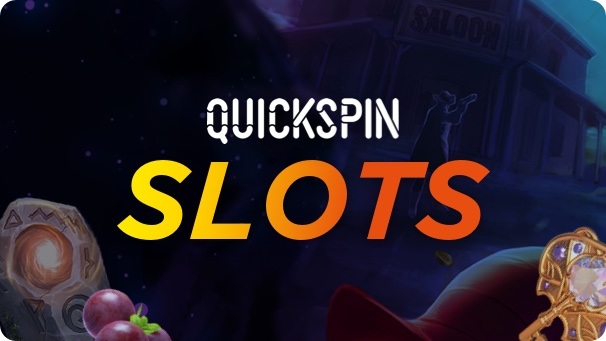 Want to know where to find the best Quickspin slots? Since we know the market for Quickspin slot sites is only getting bigger, we thought we'd step in and put together a handy guide for you. Instead of leaving you to fend for yourself and take a guess at which Quickspin casinos might be worth joining and which ones might not be, we've done all the work for you. Since Quickspin became part of the Playtech family, its presence in the industry has increased dramatically.

Today, players now have the option to join dozens of Quickspin casino sites and enjoy over 25 virtual spinners. With this in mind, our guide to Quickspin slots will not only show you where to find the company's best titles, but also give you some reasons why it's one of the top developers of 2023. So, if you're ready to learn a little bit more about Quickspin slots sites and what they're all about, then sit back, relax and let's take a look at why this developer might be the best thing to come out of Sweden since ABBA!

If quality over quantity is your thing then you'll love Quickspin slots. Founded by Daniel Lindberg and Mats Westerlund – two men that previously held senior roles at NetEnt (formally Net Entertainment) – this software company is one where slots reign supreme. In fact, according to its own PR text, Quickspin is home to the world's "most awesome slots". One of the reasons Quickspin believes it's able to offer a better quality of online slot than its peers is because it has the scope to add more dimensions to its products. Instead of working to churn out as many slots as possible, Quickspin has a clear strategy.

Quickspin will release 10 slots per year, have 6 prototypes in place at all times and have 30 concepts on the backburner at all times. Having a clear plan of what it's got going on right now and where it's going in the future basically allows Quickspin's team to relax, consider each move carefully and focus on making each game the best it can be. In reality, Quickspin isn't quick at all when it comes to releasing games, but that's a good thing. Just like a great poker player, the company takes a methodical approach to everything it does and that's resulted in it becoming one of the top slot game suppliers in the world.

At the last count, Quickspin had dozens of slots on its books, most of which are available for mobiles, and 10 or so on the cusp of being released. However, when it comes to slot types, this roster of games is exclusively video-based. Although Quickspin is well aware that jackpot slots, 3D slots and classic slots are popular among modern iGamers, its desire to offer the very best quality slots it can has led it to focus on just one genre. Thanks to this unwavering focus on video slots, you'll find that Quickspin now offers some of the most engaging and interactive examples of the genre on the market. Through a combination of in-game animations, live action backgrounds and achievement-based bonuses, Quickspin video slots are able to offer more in the way of entertainment than almost any other spinners on the market.

How Safe are Quickspin Slots?

Quickspin has undergone all the necessary checks to prove its random number generator (RNG) is, as you'd expect, truly random. Therefore, in respect of the above question, the answer is: extremely. By adhering to the regulation guidelines set out by two gambling commissions as well as meeting the high standards set by eCOGRA, Quickspin is rated among the safest slot providers in the game.

Beauty is always in the eye of the beholder and us telling you what the best Quickspin slots games are might not fall in line with your personal preferences. However, because we're here to help you get a handle on everything this top-rated software developer has to offer, we've gone ahead and picked out some of the community's favourite spinners. By scouring our list of partner sites, we've managed to find the casino slots that have been rated as "hot" by operators and players alike. Putting these together into a single list, we've come up with a selection of top Quickspin slots for 2023. Is it the biggest list in the world? Certainly not, but it should give you a solid starting point from which to start your Quickspin journey:

If we made a comparison between Quickspin and a software provider like NetEnt, it's fair to say the former would lose in terms of quantity. As we've already said, the Playtech subsidiary is not only a relatively new developer on the block, it's one that isn't concerned with sheer size. In fact, Quickspin actively limits the number of titles it releases each year and this is actually one of its biggest advantages. Now, we're not saying that NextGen, IGT, Betsoft and others are making bad slots just because they release more games each year.

What we are saying however, is that Quickspin has a clearly defined strategy and that allows it to spend more time on the things that really matter rather than worrying about when it's going to release a new game. A practical example of this ability to take time and innovate can be seen in Dragon Shrine. This recently released slot game taps into the Quickspin Achievement Engine which, in short, allows players to earn a portion of their losses back by reaching certain goals. In total, this game has 6 measures of success that are tracked each time a player makes a spin.

The more a player spins, the more points they earn and the better their achievement level becomes. The end result is that players then have the ability to claim rewards based on their in-game achievements. This dynamic is one that's almost unique to Quickspin slots and is one of the reasons it's now a shining light in the industry. Had the company not had such a dedicated focus to quality, then it may have never come up with this sort of feature and, therefore, not become a leader in its field.

Under the terms of the Quickspin design policy, you can expect 10 new games every year. In 2023 the company doesn't plan on diverting from this policy, which means you can expect to find the newest quick spinners to hit the market at a rate of about one per month. Of course, everyone has to start somewhere and while this list won't always contain the 'newest' Quickspin slots for players, it does contain the latest releases at the time of writing:

Unfortunately, when it comes to progressive jackpot slots, Quickspin isn't a major industry player. Because it's devoted the early part of its career to video slots, progressive jackpot network games have been put on the backburner for the time being. Despite not being a provider of jackpot slots, Quickspin is still one of the hottest developers on the market today. Thanks to a ‘quality over quantity’ approach and a strategy of leaving things like progressive slots to the side while it focuses on video spinners, Quickspin is quite rightly ranked as a top-tier software outfit by its peers and, more importantly, its players.

Leading US Casino with over 650 Slots and Live Casino Games