Slots have, and likely always will be one of the most popular casino games in the world. There are more slots players than any other type and it’s for this reason why you see both land-based casinos and online casinos littered with different slot games.

Over the last 20+ years, virtual slots have taken over from mechanical games. A lot of brick-and-mortar casinos now stock virtual slots, as well as mechanical, such, is their popularity.

Throughout this article we’re going to take a look at the difference between virtual and mechanical slots, highlighting how they work and which might be better for you.

Slot machines date back to the late 19th Century where Charles August Fey first designed a games machine he called, Liberty Bell. The original game was an adaptation of draw poker, a game that was incredibly popular at the time.

However, it was a game that could be quite complicated, so it was Fey’s idea to make it a lot easier to follow and in turn, play. The game was reduced to just three drums (reels) and then winning combinations would include three of the Liberty Bells all falling on one line.

The game took off with almost immediate effect. By the early 20th Century there were hundreds of games all around the world, with other manufacturers creating their version of Fey’s initiative.

Features of the games started to adapt and develop, with the inclusion of fruit symbols, more winning combinations and even jackpots by 1916. The American Prohibition (1920-33) saw these games grow even more in terms of popularity.

By the early sixties, the games were starting to take advantage of advancements in technology and switched from mechanical to electronic machines. Games were able to advance to work on their own, removing the need for attendants to pay out jackpot wins and in turn, become independent. 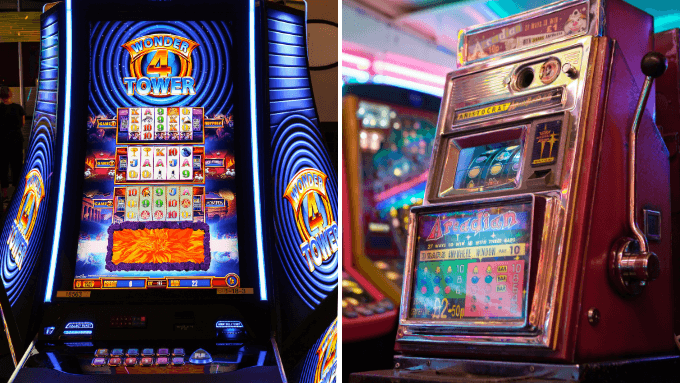 Slot machines have evolved drastically over the years (Credit: Alamy)

Video slots came about in the late seventies and with it saw a new breed of games. Developers like Bally, who owned 90% of slot machines at the time, created games that were more interactive and allowed developers to create themes based on the games.

As the internet started to influence the world as we knew it in the early nineties, only slots shifted from casinos to online. Microgaming is credited with making the first online slot in 1994 and are still widely regarded as the biggest slots developer in the world.

Slot games are now highly polished and incredibly diverse. There are thousands to choose from, each having different themes, best slot bonuses, paylines and feature rounds, to make them stand out.

How does a Mechanical Slot Work?

Even when the game is not being played, the random number generator still operates. Once the button is pressed, the RNG then spits out a combination which in turn shows the results on the reel.

On older slots, a series of pegs would be included in the machine and as the reels spin, the pegs would fall into place randomly to create a combination. Each reel would then be connected to a plate that when stopped, would payout real money based on the combination of the reel.

The Difference Between Mechanical and Virtual Slots

Mechanical slots are much more limited than virtual slots. The number of combinations that it could create from its 3-reel set up meant that the games can only do so much in terms of spinning and then offering up a combination of symbols.

Virtual slots can take advantage of a much more advanced random number generator. This in turn allows games to include more reels, more symbols, more paylines and a much more diverse range of games as a result. With virtual or online slots the chances of landing some free spins is far higher and while mechanical slots can have this functionality, it would be pretty rare

The Random Number Generator (RNG) is an integral part of any slot machine. This is a computer that creates a set of random numbers which in turn, are then turned into combinations.

Trying to work out the maths behind these things is highly complex. But what we can say is that with each comes an algorithm that makes the combinations random. It takes what is known as seed numbers and then does multiple calculations with that number to create a random number.

All virtual slots come with an RNG and these are tested by governing bodies such as the UK Gambling Commission or Malta Gaming Authority to make sure they are both true and fair.

Jackpot games are the most popular slots for both mechanical games and virtual. The principle of each is the same; you need to get the least common combination of symbols to trigger the biggest prize.

They do work a little differently though. Mechanical games are limited in terms of the jackpot they can payout. This is mainly based on the number of spins or players that it will see over some time, in that, it’s much lower than virtual slots.

Virtual slots can see more players in a day than a mechanical game might see in a year. As a result, they make more money and so can pay out larger jackpots, whilst still making a profit.

Progressive jackpots are a good example of this. These are games where the player contributes to the jackpot with each spin they make, meaning that it grows quickly.

What makes them the biggest games in the industry is that they can run across multiple casinos. This means that the same jackpot can be played, contributed to and then won by thousands of players across dozens of online casinos.

Virtual and mechanical slot may seem quite different, but they still have a lot of the same core values in them from the games that were created by Charles Fay back in the 19th Century.

The biggest difference between the two is that virtual slots can be much more dynamic in how they work and therefore, more exciting to play, while also being more accessible to play on the go by choosing online mobile slots. Whilst mechanical slots will always have a nostalgic role to play in the industry, the majority of slots are online and this is where the future firmly lies.

🎰 How are online slots different from slot machines?

Online slots are computer generated and run using an RNG and algorithm. Machine slots are mechanical and use different types of random number generators to power them.

🎰 Where did the term slot machine originate from?

The slot machine came from the area on the machine that coins were slotted into and then retrieved from. The phrase was coined decades ago, with slot machines dating all the way back to the 19th century.

🎰 When was the slot machine invented?

The first slot machine was invented back in the late 19th Century by Charles August Fey. The game was called Liberty Bell. Since then the slot machine has come on leaps and bounds and they are accessible all over the planet at land-based casinos and most devices that can access the internet.

🎰 What is a random number generator?

A Random Number Generator (RNG) is a device that randomly creates formulas for slots that are then converted into the combinations that you see on the screen. It uses a complex algorithm that ensures the symbols that appear on your screen are completely random.

🎰 Why are online slots so popular?

The fact that you can play slots for literal pennies and win huge sums of money is one of the main reasons. They are also incredibly easy to play for the most part, and if you have the extra cash available which you are willing to lose they can be a great source of entertainment with the added bonus of potentially mouth-watering wins.