No casino game has a bigger range than slots. Most online casinos now have thousands to choose from, which has its pros and cons. If you’re new to slots, then this is going to seem highly overwhelming and not all that straightforward about which games are best for you.

As a result, throughout this article, we want to look at the varying range of slots you can choose from and how each of them work. Following this, you should be able to be better placed to not only choose the best games but also save both time and money whilst you search.

Before the online revolution, traditional slots could be found in bars, restaurants, casinos, pubs, clubs, sporting events and pretty much anywhere you could squeeze one in. Whist the machines look a lot different to how the modern slot works, the fundamentals are largely unchanged.

A traditional slot would be a coin-based machine, meaning that you need to feed money in to make it work. You’d have a lever of sorts to start the machine and the reels would spin, creating winning combinations.

How the machine worked would vary slightly. Most of them had what are called pin mechanisms which would sync up when a winning combination was made and then payout a sum of money to the player. An easy way to grasp how this works is by comparing it to a simple lock and key mechanism where only the right key can unlock the lock. 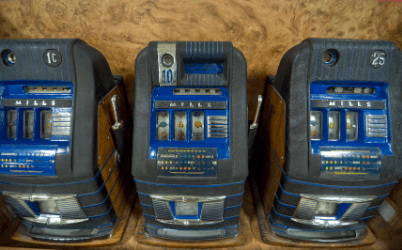 The games would be multi-line, meaning that you could create several winning paylines within it. Some allowed for the ability for progressive jackpots to be included, which we talk more about in the next section.

Even though traditional slots are starting to succumb to online and video slots, the games are a strong part of the history and tradition of slot machines. What’s impressive is that, when stripped back, the games are very much the same as online.

Jackpots are one of the most popular forms of slots. All games will allow players to win large sums of money, jackpots are where the sensational sums can be won.

There are generally two types of jackpots: flat tops and progressives.

Flat tops are jackpots that created within a regular slot and will be a fixed amount for that game. They will be synced up to hitting a certain winning combination and for that combination, you win whatever the jackpot is set at. For example, a slot may state that it has a C$10,000 jackpot attached. This the max that can be won from that game for a single spin.

A progressive slot is a jackpot that keeps evolving. To do this the game takes a small amount from each stake the player makes and adds that to a jackpot pool. The amount that is taken per spin will vary based on the game. If we assume 10% as an example, it will mean that if you were to wager C$10 on a single spin, C$1 of that would go into the jackpot pool and the remaining C$9 would be toward your spin.

Given the huge volume of players that target these games, it’s not uncommon for progressive jackpots to hit the 7 or even 8 figure mark. The biggest win to date came on a slot called Mega Moolah which is hosted by Microgaming. The lucky winner picked up a staggering €18.915,721 for a single spin.

One of the ways that online progressive jackpots become so big is that they are often hosted by the game developer and not the casino. As a result, the game developer may have the same game on dozens of casinos, giving a much bigger shop window for players to access these slots. More players equal more money and in turn, colossus prize pools.

Video slots are the here and now of the online world. In principle they work much the same as a traditional slot, but given they are computer-based, can be changed, designed and created with much more freedom, hence the reason why you see so many online slots.

As the name would suggest, a video slot is all computerised. Now, you can still get video slots in brick-and-mortar casinos, and they work in much the same way as they do online.

The backbone of these slots is that they all contain some sort of reel or grid layout, paylines and winning combinations. They can look very different and have many different themes that are attached, but they work in much the same way.

3D slots are very much thought of as the “next-generation” game in the online casino sector. They take the standard video slot and create it into something that is not only more visually appealing, but usually more immersive when it comes to gameplay.

As the name would suggest, a 3D slot is a game that takes advantage of the latest technology to create a game that is essentially in 3D. Most video slots are 2D and “flat” which allows the game developer to concentrate on making games that look good but are more focused on the user experience.

With 3D games, developers can flex their muscles a little more than they usually would creating games that not only look better but also function better as well.

Whilst 3D is something that is still in its infancy, there is no doubt that this is going to be the future of online slots.

Aside from progressive games, themed slots are the next cab off the rank when it comes to popularity within the slots sector. They include themes and brands from a host of different TV shows, movies, brands, sports and so much more.

What you generally find with themed games is that the quality and even the gameplay is that bit higher than your standard video slot. The reason is that the games are now representatives of brands that have higher expectations and also budgets for these games.

This is why when you see the likes of The Simpsons, Gladiator, Superman and Terminator, they are games that are rich with bonus rounds, features, movie references and graphics. The game developers set about creating these games would have been aware of the brand and what their standards are.

Some of the most popular themed slots are that of TV shows. Deal or No Deal is probably the biggest of the lot right now and even though the show is on a hiatus from our TV screens, the game is massive within the slots sector.

One of the reasons is that the game lends itself so well to potential bonus rounds for the slot. Choosing boxes for your winnings is a carbon copy of how the show works, so the crossover is easy to tie in.

Other TV shows include the likes of Britain’s Got Talent, Who Wants to Be a Millionaire, EastEnders, Emmerdale and Coronation Street, to name just a few. Within each of these, you often get throwbacks to old clips from the show, music that is linked to soundtracks for the show and even appearances from characters and host of each show.

The only negative that you get with themed slots is that you often pay a slight premium to play these games. The premium comes in the form of lower RTP’s, which means that the casino's cut are a little higher than some of their other games. Most would argue that it’s a small price to pay for the trade-off in exemplary gameplay.

Bonus slots are games that are generally focussed on some sort of bonus feature or they are linked to clearing a welcome bonus of some sort. Please note, these are two very different features.

The bonus rounds that are found within slots are some of the most lucrative sections. This is where you can hit jackpots, unlock multipliers and even play the feature rounds for most games.

RTP (Return to Player) and volatility are two key aspects of all slots that you must be aware of. RTP is stated as a percentage and highlights the casino's edge for that game. The lower the percentage, the higher the edge for the casino.

For example, if you have a slot that has a 95% RTP, this means that for every C$1 staked, the casino pays out 95c and takes 5c. The higher the number, the less they make per unit staked. If this were to happen with every hand, then no one would play slots as what’s the point in losing money on each hand? To alleviate this and allow players to win some of the time, volatility (variance) has been created within each game.

📲 Can you play all types of slots from mobile devices?

The majority of slots can be accessed by mobile devices these days. There are usually only a handful of games that can’t be accessed on mobile and these are generally games that aren’t all that popular, so the game developer has not deemed them worthy of making the transition.

🎰 How many different slot machines can you play?

You can play hundreds or even thousands of different slot machines. You have a much greater range of machines to choose from online, but even brick-and-mortar casinos have a strong range still. There are thousands of games out there, so you can pick and choose which ones suit you.

🎰 What kind of new features do modern slot machines have?

Modern slots are starting to move into 3D gaming, which creates stunning visuals. They also include scatters, wilds, bonus rounds, free spins and even a range of grid-format games, changing up from the common reel format. Most modern slots will be available to play across multiple devices too, so you can play on your computer or on the go on your phone.

💻 Why play online slots instead of slot machines?

You get a much wider range of games to choose from meaning that you can dial in the right slot for yourself. If you are playing in a land-based casino, you can only choose from the games on the casino floor. Also, playing an online slot gives the added incentive of playing from the comfort of your own home!

🎰 How do you find your favourite slot game online?

You can start by searching through the masses of reviews on SlotSource. Alternatively, you can use the search function within the casino to find games that you want to play. Have a look through our slot reviews and after a while, it will become apparent if you are leaning towards any sort of style, theme or slot developer.

Top 5 Most Popular Online Slot Games 2022: What Makes Them So Good?

Virtual Reality Casinos - Are They The Future Of Slots?