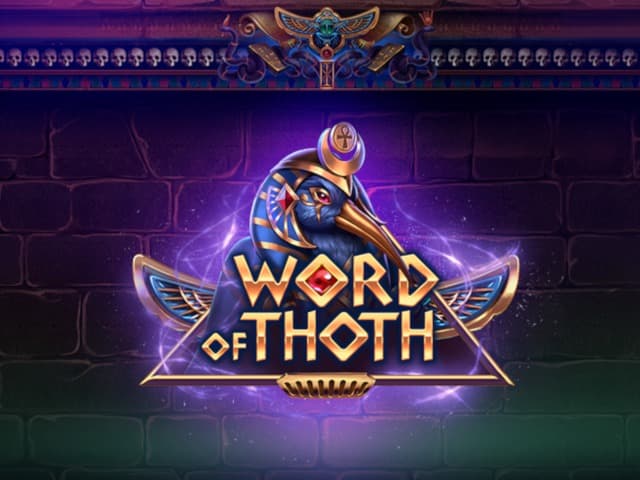 Ancient Egyptian slots usually tend to stick to classic gameplay. That’s certainly not the case with Word of Thoth, a new Yggdrasil release developed by Jade Rabbit Studios. The slot will take you back in time to the ancient city of Khem for a sandy adventure where you can unearth an ancient Egyptian treasure.

A 6x4 slot with amazing graphics, Word of Thoth looks set to become Yggdrasil Gaming’s new hit. Based on the ancient pyramid builder and Egyptian deity Thoth, it’s got a bit of a mystique surrounding it. The Word of Thoth slot comes with 4,096 ways to win and a total of 11 symbols.

Play Word of Thoth for free or real money in any Yggdrasil casino and let the slot turn around the clock.

As mentioned, the Word of Thoth online slot takes part on a 6x4 grid. It gives you 4,096 ways to win, with any combination of 3 or more identical symbols on adjacent reels awarding a win. Yggdrasil Gaming never disappoints when it comes to graphics, and Word of Thoth is proof of it. The slot looks nothing short of perfect and sounds great too, with sound effects that fit the design and theme.

The slot has 6 low-paying symbols, 4 mid-paying symbols, and 1 premium. Thoth himself pays the most – 25x for 6 on a line. The slot machine game also uses a wild and scatter to deliver bigger wins and trigger special features.

Word of Thoth Slot on Mobile

Just like all Yggdrasil releases, Word of Thoth is developed on the HTML5 platform. This means that you can play it on any Android and iOS device without the need to download an app.

How to Play the Word of Thoth Online Slot?

While the theme may be a bit unusual, playing the Word of Thoth slot machine is very easy. Yggdrasil has placed all the controls right below the reels. Set your stake first and hit the Spin button to start the adventure. You’ll be hoping for premium symbols and wilds in the base game to hit big wins.

Every time you score a win, the cascading reels jump into action. The popular mechanic will substitute the winning symbols with new ones, which can lead to new winning combinations. The Cascades will only stop on a loss. Word of Thoth also has a meter that is filled with each cascade win and scatters.

If you’re lucky to fill all 5 spots on the meter, you enter the free spins round.

The free spins bonus round in the Word of Thoth slot can be triggered by filling out the meter or landing 3 or more scatters. You start with 10 free games by default and get 2 extra ones with each extra part of the meter lit up.

During the bonus round, multipliers and extra spins are key to the action. Fill 3, 4, or 5 slots, and you’ll get a corresponding multiplier worth x3, x5, or x10. You also get 1, 3, or 5 extra spins to land even bigger wins.

Wilds are not removed from the reels in the free spins round after they’ve been part of winning combinations. If you don’t want to wait for the bonus round to start, you can buy it at 50x your wager.

The RTP of the Word of Thoth’s slot game is set to 96.12%. That’s the sweet spot for high volatility slot and not unexpected. If you unlock all multipliers in the free spins round, you can potentially win up to 7,384x your wager.

Word of Thoth is not your typical ancient Egypt slot game. It comes with a few twists and turns that make it as modern as Egypt-themed slots come. Thanks to cascading reels and multipliers in the free spins round, Word of Thoth is a slot that’s well worth your time and money.

Play it for cash at our top online casinos, and you will have a chance to unearth a treasure beneath the pyramids.

Who created the Word of Thoth online slot?

The Word of Thoth slot was created by Jade Rabbit Studios for Microgaming’s YG Masters platform. The slot game has all the marks of a Yggdrasil release, featuring perfect graphics and sky-high rewards.

Word of Thoth slot’s RTP is set to 96.12%. That’s right in the middle of the industry standard for a highly volatile slot game.

What’s the minimum wager I can place on the Word of Thoth slot?

The minimum wager available in the Word of Thoth online slot is $0.20 per spin. That’s a reasonable wager for most new players and a great starting point for most spinners.

What role does the meter play in the Word of Thoth slot game?

Start the slot, and you’ll see a green meter that is filled on every cascade win and scatter that lands on the reels. It has 5 slots – if you manage to fill them all on a string of spins, you will enter the bonus round. It plays a role in it too, with multipliers awarded for each slot filled.

Does the slot have a free spins round?

Yes, the Word of Thoth slot has a free spins round. You can enter it with 3 scatters or by filling all 5 slots on the meter.

How can I win big in the Word of Thoth online slot?

To land the really big wins, you will need to get access to the free spins round. Once you’re in, filling the slot’s meter will give you multipliers up to x10 that will significantly raise your winnings.

Does Word of Thoth have a jackpot?

No, the Word of Thoth slot doesn’t have a jackpot. However, the maximum win is nearly 8,000 times your wager, which comes close to jackpot territory.

Can I spin the Word of Thoth slot on my phone?

Yes, you can. Word of Thoth was built on HTML5, so it’s optimised for all new and older Android and iOS devices.

Should I download the Word of Thoth slot to play it?

There’s no need to download the slot to spin it on your phone. It can be played in any Yggdrasil casino via instant-play platforms. This means that the slot can be enjoyed straight from your browser.

Which slots are similar to Word of Thoth?

Word of Thoth will certainly draw comparisons with Yggdrasil’s Valley of the Gods 2. Other similar slots include Scroll of Dead by Play’n GO and Wonders of Egypt by Blueprint Gaming.