Wild North is a 5x4 classic slot by Play'n GO with an Alaskan wildlife theme, and it's among the loosest classic slots as it has theoretical payout of 96.55%. This slot game has si... Read Full Review 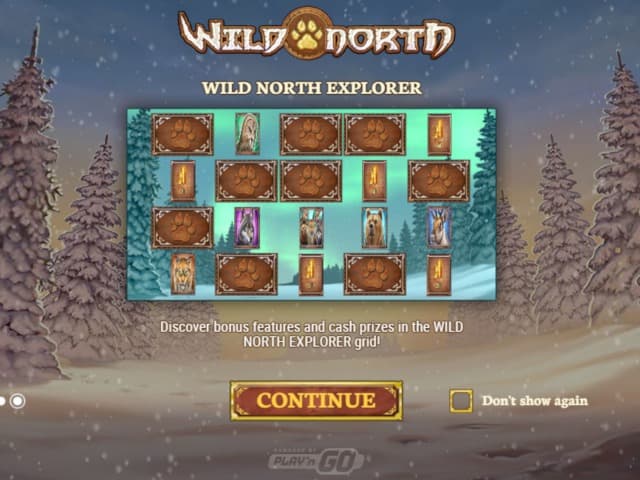 Wild North is a 5x4 classic slot by Play'n GO with an Alaskan wildlife theme, and it's among the loosest classic slots as it has theoretical payout of 96.55%. This slot game has six different free spins features and a bonus round, so it's incredibly fun to play, too!

The game doesn't uses coins and has a fixed number of 40 paylines, so all that's left for you to do before clicking Spin or Autoplay is to simply choose your bet from 12 levels that are offered, from 0.20 to 50.00. When you choose your bet, the Paytable wins will automatically reflect your bet size so you'll be able to see what the game really pays.

There are six card symbols in this game, which is plenty, and three-of-a-kind wins can only give you 0.10x or 0.20x of your stake back, which means they're utterly worthless unless you land five of them on a winning payline, in which case you'll make 1.00x to 2.25x your bet. The four symbols you will care about are Owl, Wolf, Bear and Reindeer, and these will pay 2.50x to 6.25x your bet for five-of-a-kind, which means that there is no single powerful symbol in this game, and that you need to get multiple winning paylines or benefit from bonus features in order to make money. Fortunately, there's no shortage of these – this game has six free spins features plus a bonus round.

Three Northern Lights Scatters trigger the bonus feature wheel which will randomly award you one of seven features. The Great Wilderness will give you 3 free spins with 4x4 mega symbols available on reels 2 through 5 on each spin. Wild Lynx will give you 3 spins where one or two reels will turn Wild on each spin. Running Reindeer will only give 1 free spin, but Reindeer will be stacked on reels 2, 3 and 4, and you'll get an additional re-spin when Reindeer symbol covers those three reels or when Reindeers create a 3x3 block. Savage Bear will only give 1 free spin, but a savage one, as a random win multiplier will be assigned to your spin, up to x30! Wolf Pack will give 1 free spin where a 2x2 Wolf symbol appears and sticks to the reels during the feature, and 1 re-spin is awarded whenever another Wolf appears, and Wolves are Wild. Eyes of the Owl will give 1 free spin, and two 2x2 Owls will appear and stick, and 1 or more re-spins are awarded until you land a win.

The seventh bonus feature is the Wild North Explorer, which is a bonus round in which you pick prizes from a 5x4 board. You keep picking prizes until you reveal a final image, and you can win up to 125,000 coins here, in theory. All the bonus features in this game are not that rewarding most of the time, but can be on occasions, and the fun part is that you get to play them all as they're getting triggered often enough. The game as a whole has medium variance.

Play'n GO are known for their classic slots, but Wild North is arguably among the best ones they've ever made. The bonus features make this game lots of fun to play, more than most other classic slots, and at the same time the game pays well. This is one of those slots that can't pay well on a single payline but you need the bonus features, so if that's your cup of tea play it at a real money casino.