Don your best armour and get ready for a knight on the town as Warlords: Crystals of Power online slot takes you back to medieval times. Three fearless rulers from across the known... Read Full Review 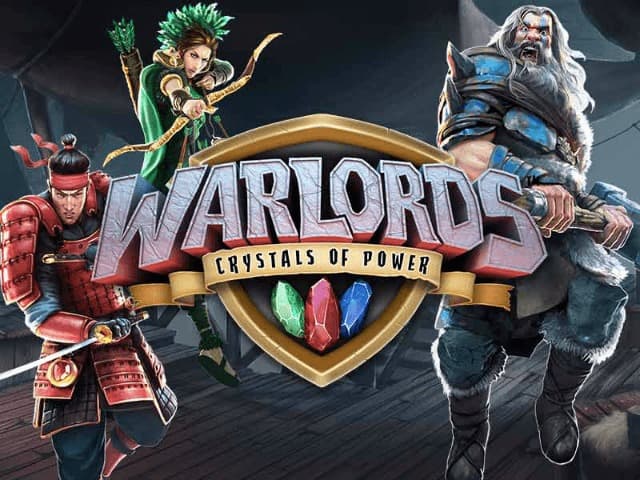 Don your best armour and get ready for a knight on the town as Warlords: Crystals of Power online slot takes you back to medieval times. Three fearless rulers from across the known lands fight for world dominance over five reels and 30 paylines. Software developer NetEnt has set the action of this gripping slot on a misty battlefield where the three armies collide. Throw in some mystical crystals and the result is Gladiator with a slice of Excalibur. Read through this Warlords: Crystals of Power guide to learn the arts of war that'll help you battle the warlords and win their treasure.

Well-known software developer NetEnt pits three rulers, a samurai, a priestess and a barbarian against each other in a battle of the ages. The theme of power is encapsulated by the magic crystals that each ruler possesses, along with a companion animal that aids them in combat. NetEnt has created a gorgeous 3D video slot, with a stunning opening cinematic scene that could be lifted straight out of a movie.

The intricate character design is not simply for the opening story animation, with all the main characters appearing as stacked symbols on the reels. These lead to a number of different bonuses, some specific to the character types, while others are available no matter which warrior you're fighting for. With a super-strong return-to-player (RTP) rate of 96.8%, Warlords: Crystals of Power is worth donning a suit of armour for.

Warlords: Crystals of Power slot game features the three leaders as stacked tiles, wielding their weapon of choice while standing proud with their wild pets. If you manage to land a payline with them on it, the reels are set ablaze while the warriors come to life. The animals and the warrior’s masks appear as individual symbols, but they don't pay out as much as the warriors themselves. The blue barbarian is the lowest, followed by the green priestess, with the red samurai the highest-paying set.

The three different weapons come into play during the Random Wild overlay. The Wild symbol is the three crystals of power united and if you trigger the overlay by landing a weapon icon, it releases several of these Wilds across the reels. How they appear depends on which weapon is activated. The barbarian’s hammer creates a block of four wilds, while the samurai’s sword slices diagonally across the reels, leaving three Wilds in its wake. The priestess fires arrows at the reels, summoning three Wilds wherever they land.

Warlords: Crystals of Power also features three different Scatter symbols, representing the banners of the different armies. Each Scatter has the potential to open up the Free Spins bonus round. If you land two or more Scatters on reels two, three and four, a battle will commence. The banners will be redressed in the colour of the victor and a re-spin granted, which can bring even more Scatters to the reels. You must land three matching Scatters to trigger the Free Spins round.

The barbarian’s blue banner offers nine free spins, with all the symbols now associated with that character. If you hit his Scatter symbol, it'll award three more free spins. The priestess’ green banner means you only get seven free spins, but each winning payline with a Scatter increases the multiplier bonuses by one. The samurai brings five free spins, but his Scatter transforms into a Sticky Wild.

Ready for battle? Join the Warlords on their quest to take over the world and see if you can bank some gold along the way with NetEnt's high-octane Crystals of Power slot.