Wanted Dead or a Wild Slot

Hacksaw Gaming's dropping a fully loaded, Wild West-themed slot, only in this adventure blurting out “Howdy'' may not be the smartest of choices in this deadly environment. Instead, this Wild West-themed video ... Read Full Review

Play Wanted Dead or a Wild for Free Now! 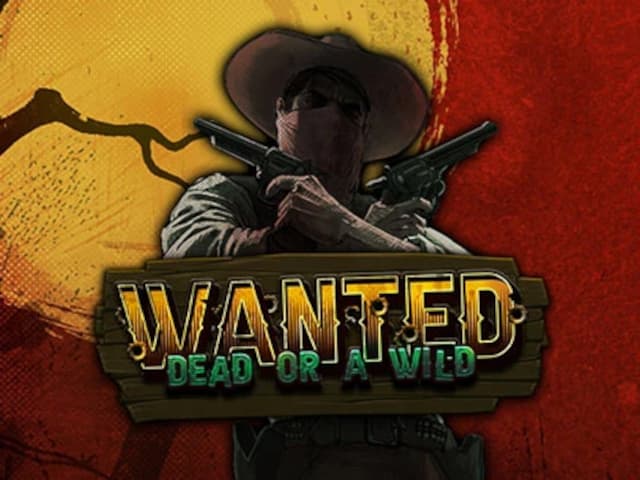 Wanted Dead or a Wild Review

Hacksaw Gaming's dropping a fully loaded, Wild West-themed slot, only in this adventure blurting out “Howdy'' may not be the smartest of choices in this deadly environment. Instead, this Wild West-themed video slot is titled Wanted Dead or a Wild and is overflowing with Hacksaw Gaming's traditional cocktail of attractive visuals, striking sounds, killer features, and a whole lot of grizzly gameplay. The Wild West was the major hotspot for the crazy cowboys of the past, saloon specialists, bucksome bandits, and other serial wealth seekers, so it’s safe to say that the stakes are high and so is the competition.

Expect an extraordinarily dark start, where the 5x5 game grid is set out in the blazing heat of the sun, in the midst of the dry and humid surroundings and protection in the form of wired fences. Now, it’s worth noting that this isn’t your average Wild West slot, and it’s safe to say that the usual comfy country backdrops have taken more of a rather disturbing turn, in favour of something a little bit chilling and thrilling.

You may begin to wonder how you ended up agreeing to this eerie challenge. If you were a law-abiding citizen in the past, it’s safe to say that you’re going to have to leave that behind you. The best part is that you have the power to decide how your western quest pans out.

Hacksaw Gaming is known for its library of epically-formed slots, such as Chaos Crew which landed on slot sites back in 2020, and it’s fair to say this is most definitely the upgrade, which can be played for free or with real money at any of your favourite online slot sites.

The blood-red backdrop houses a 5x5 grid, armed with a total of 15 fixed paylines. You will be presented with a total of ten regular paying symbols, appearing in the form of skulls, liquor bottles, bags of money, and bullet containers. Collecting five of any of the high-paying symbols, as a combination of 5, will release a wondrous payout of between 5 and 20 times the stake. The Wilds can land in any position on the gaming grid, can substitute for any of the regular paying symbols, and are worth 20x the bet when a combination of five lands on the grid.

How to Play Wanted Dead or a Wild Slot

To get started with the Wanted Dead or a Wild real money slot, it’s worth reviewing all related information to the game, which can be sourced by clicking on the three-bar button which is located at the bottom left-hand corner of the screen. To adjust your wager, you can navigate the betting menu at the bottom right-hand corner of the screen, by increasing or decreasing the (+) and (-) buttons. The minimum bet begins from as low as 0.20 and can be increased to 100.00 in your respective currency. Once all adjustments have been made, the Spin button is ready to be hit from the bottom right-hand side of the screen.

Wanted Dead or a Wild Slot Gameplay on Mobile Devices

Navigating your way through the dark and deadly quest that is Wanted Dead or a Wild, will mean that you get to experience the deep, dangerous, dark quest with a bit of a safety blanket, which appears in the form of any one of your chosen devices. Choose to press play from your mobile smartphone device, tablet, laptop, or desktop. Any of these devices are supported by iOS, Android, or Windows and will offer a more than friendly user experience, thanks to the inclusion of HTML5 technology.

Wanted Dead or a Wild's bonus features consist of whole reel wild multiplying symbols and a total of three Bonus rounds, where you are able to trigger from the base game when special symbols have landed, or with the option to purchase if this feature is available.

Keep your eyes peeled for the VS symbols, which appear predominantly within the base game or when the Duel at Dawn feature has been activated. Upon landing, they will then increase in size to fill all positions on the reel, and will then transform into wilds. These symbols also happen to contain a win multiplier of x2, which can reach as high as x100, and if more than one VS symbol appears at once, then the multipliers will be added prior to being added to any single winning combination.

In the event that three or more of the Train Robbery symbols land during the base game, The Great Train Robbery feature will become activated. This bonus game will award a total of 10 free spins, and all of the landed Wilds will remain sticky for the entire duration of the bonus feature. This feature in itself has been classified as a medium volatility feature.

In the event that you land three or more of the Duel symbols, you will trigger the Duel at Dawn bonus feature, along with a total of 10 free spins. The major difference between this bonus and the original base game is that additional VS symbols are likely to appear. This bonus game has been classified as a very highly volatile bonus game.

Another highly volatile feature is the Dead Man's Hand bonus, which will be triggered when three or more of the Dead symbols hit. This particular bonus feature is split into two separate parts. In the first part, a total of 3 free spins will be awarded, and only the Wild symbols, Multiplier symbols, or Placeholder symbols will hit in this context. When Wilds or Multipliers land, they will be collected and rest the amount of spins back to the original 3. Collecting up to 20 Wilds along with a win multiplier of x31 from this phase is a strong possibility. In the event that  3 consecutive non-winning spins appear, this transition will draw to a close. When the gameplay shifts to the Showdown, 3 free spins will be awarded. The accumulated amount of Wilds will be added to the grid on each of the free spins, and the Multiplier will be awarded to any of the accumulated wins.

Lastly, the buy features section, allow you to purchase The Great Train Robbery, Duel at Dawn, or Dead Man's Hand for 80x, 200x, or 400x the bet.

Since this adventure isn’t without risk, we’d expect even more on the rewards front, which compensates for the difficulty of this venture, awarding up to 12,500x the stake for players who know how to bring their a-game. In terms of the game’s RTP and volatility, the RTP is set to 96.38% and volatility is high.

Hacksaw Gaming has successfully mastered the art of forming slot games, where there’s a strong focus on powerful audiovisual qualities, and brilliant bonus features and becomes the greatest of them all in terms of gameplay. First and foremost, this slot can be differentiated based on its unconventional approach toward the layout and structuring of the visuals. But it’s not all about the looks, there’s a lot to offer on the menu when it comes to bonus features, awarding free spins, praiseworthy payouts, and magical multipliers. It’s a strong yes, from us.

When was the Wanted Dead or a Wild slot released?

The Wanted Dead or a Wild video slot made its way to the online gaming market back in September 2021, offering up a whole new way of presenting a Wild West-themed slot with a mighty twist, unlike any other slot with similar themes.

Who created the Wanted Dead or a Wild slot?

The Wanted Dead or a Wild slot was released by Hacksaw Gaming, a rising player within the online video slot market, responsible for high-quality slot creations, including Hand of Anubis, The Bowery Boys, and Alpha Eagle, to name a few.

What is the RTP in Wanted Dead or a Wild slot?

The Wanted Dead or a Wild video slot has a default return to player (RTP) OF 96.38%, however, this is subject to change since the volatility of the game alters based upon the action taking place within the base game, and may shift based upon the bonus features being triggered throughout the game.

Which would be the best online slot site to play Wanted Dead or a Wild slot?

The Wanted Dead or a Wild video slot is available to play online at all premium online casinos. We’d say that the possibilities are endless and would recommend that you run a thorough search, to play at the best slot sites that offer you the best bonus offers to enhance your slot experience.

Which online slots are similar to the Wanted Dead or a Wild slot?

Hacksaw Gaming has created a number of games that offer a similar theme to the Wanted Dead or a Wild video slot. The most prominent example would be the Chaos Crew online video slot, which is also worth a try.

Is the Wanted Dead or a Wild Slot a highly volatile game?

By default, the Wanted Dead or a Wild video slot is classified as a high-volatility video slot, and it’s as highly rewarding as it is risky. The volatility of the game is also subject to change when the bonus games become activated.

Should I wager the maximum amount when playing the Wanted Dead or a Wild slot?

When adjusting your wager for the Wanted Dead or a Wild video slot, we’d recommend budgeting wisely, based on your own needs, requirements, and abilities to take risks. Remember to gamble responsibly, if you decide to increase to the maximum bet during your experience.

Can I win real money when playing the Wanted Dead or a Wild slot?

What is the maximum wager when playing the Wanted Dead or a Wild slot?

The minimum bet for playing The Wanted Dead or a Wild video slot machine game starts from as low as 0.20. The maximum bet for the entire game is capped at 100.00 in your respective currency, and cannot exceed this amount.

Which special symbols will I find when playing the Wanted Dead or a Wild slot?

When playing the Wanted Dead or a Wild video slot, you will find a variety of symbols, including 10 regular paying symbols, Wilds, and a vast array of special symbols which are linked directly to the game's outstanding bonus features, which separate themselves from the base game.