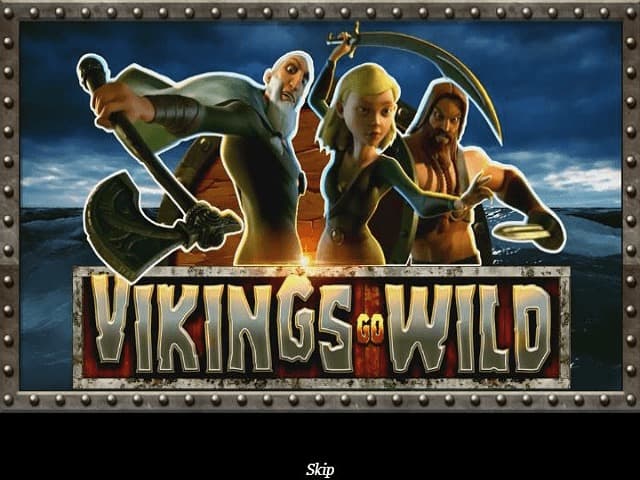 Scrub your beard with the best sea salt: Vikings Go Wild online slot takes brave Nordic warriors on a voyage across the ocean in the face of grave danger. Heroic men and women depart their shores in search of new lands filled with treasure, only to be beset by giant sea monsters en route.

Vikings Go Wild slot has 25 paylines spread over five reels framed upon the sail of the ship, bookended by two dragon figureheads. Packed with fiesty characters, chests of loot and plenty of ways to win, it's a hell-or-high-water adventure from innovative software developer Yggdrasil. Read through this Vikings Go Wild guide to chart your course through dangerous waters and learn to fight off the serpentine tentacles that attack your ship.

The story behind Vikings Go Wild sees four brave Vikings journey across the waves, seeking out undiscovered lands and any treasures they can bring back with them. On the way, they encounter trouble on the water, as giant tentacles wrap around their ship. As well as this high-intensity action, the game features a few intriguing bonuses and an alluring jackpot that pays out regularly.

Yggdrasil Gaming is sailing in familiar territory with this slot, seeing as the company’s name is borrowed from the fabled tree of the Norse Gods. It's created characters with a cartoony look, similar to those in How To Train Your Dragon. The animated sea creatures in Vikings Go Wild are not the only big game feature though; this online video slot has a huge return to player (RTP) value of 96.3%.

Vikings Go Wild features two different types of symbols in its base game. The first is a series of Viking coins, starting with green, then bronze, silver and the highest paying gold currency. A full payline of the green coins pays out 50x the bet. This increases by ten the higher you go, with the gold coins worth 80x the wager. The second set of symbols are the adventurous Vikings themselves. The fearsome shieldmaiden is worth 175x the bet if you collect a full payline with her on it. The older, greying Viking is worth 200x at the most. The burly, ginger-bearded warrior is worth 225x the wager, while the handsome Viking leader pays out the maximum of 250x the bet.

There's a Wild symbol that can be substituted for any symbol with the exception of the free spins icon. The free spins round is activated by landing three or more of the sailing ship symbols. You can win up to 24 free spins and during this round each Viking can potentially turn into a Sticky Wild if they land on a winning payreel. These will remain on the board until the free spins round has ended.

There's also a coveted Treasure Chest symbol that can appear in both the normal game and the free spins bonus round. It only appears on the last reel, but if discovered, can be worth between eight to 12 free spins, or 1000 coins in the base game. In the free spins bonus, it only offers an additional two to four free spins as well as the 1000 coins. It can also trigger the Wild Reel feature, which turns the whole of the reel into a Stacked Wild.

Ready to voyage across the ocean and claim your hidden treasure? Join the most fearsome warriors in the world on their quest in Vikings Go Wild today... or check out the sequel where the Vikings Go Berzerk.