Who wouldn’t want to be a millionaire? What about a billionaire or a trillionaire? The latter is the theme Red Tiger Gaming used in its latest slot simply titled Trillionaire. A ... Read Full Review 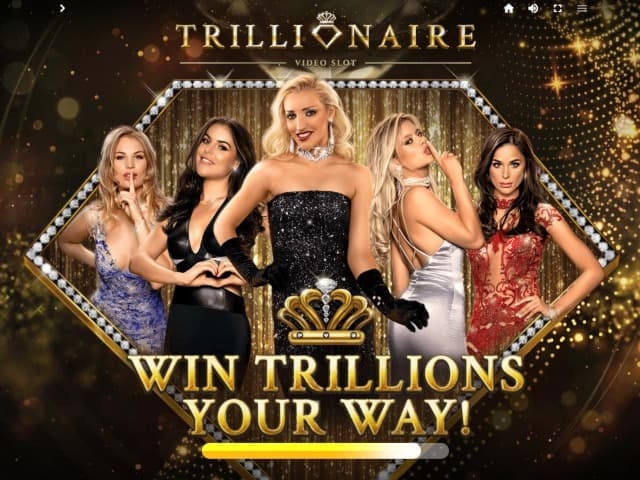 What is the RTP in the Trillionaire online slot?

The RTP of the Trillionaire online slot is set at 95.76%. That’s just under the 96% industry average, which might be a bit disappointing for some players. However, keep in mind that the slot has three bonus features that can pay big.

Can I play the Trillionaire slot game on mobile?

Yes, you can. As a matter of fact, Red Tiger is primarily a mobile-oriented studio, meaning that the slot is perfectly optimized for mobile devices.

Do I need to download Red Tiger's Trillionaire slot?

No, you don’t need to download the Trillionaire slot to play it. It works flawlessly on instant-play platforms like all online casinos these days have. Just enter the web address in your mobile browser, and you’re good to go.

What slot symbols are in the Trillionaire slot?

The Trillionaire slot has four low-win symbols (card royals) and five high-paying supermodels that also act as wilds. If you want to form glitzy winning combinations, they’re key to it.

What is the best online casino where I can play Trillionaire?

That depends entirely on you. There are plenty of online casinos that use Red Tiger Gaming’s software and all of the studio’s slot games. Trillionaire should be among them as one of the latest hits released by the popular studio.

Does the Trillionaire online slot have free spins?

Yes, the Trillionaire slot comes with a free spins round. It is triggered by at least three scatters, which you can’t miss – they are modelled after Fashion TV’s iconic diamond logo.

Should I always wager the maximum amount on the Trillionaire slot?

No, you don’t need to wager the maximum per spin on the Trillionaire slot. The range of wagers accepted is pretty wide, making the slot available to new players and high rollers as well.

Is Trillionaire a jackpot slot?

No, the Trillionaire slot doesn’t have a jackpot. Red Tiger Gaming has decided to opt against the idea of a fixed or progressive jackpot in this one, but the slot can be pretty rewarding. The cash wheel spin feels like a jackpot, especially if you get to the 4th inner circle.

What online slots are similar to Trillionaire?

Trillionaire is a fashion-themed slot, so unsurprisingly, the most similar slots to it are fashion-inspired. We can mention High Fashion by RTG as the one that comes closest to it. Microgaming’s Playboy slot is also worth a try.

When was the Trillionaire slot released?

Red Tiger Gaming released the Trillionaire slot in mid-February 2021. It’s part of a much bigger rollout of slots coming in 2021. The studio has already announced dozens and we hope that they’re as great as this one is.

Who wouldn’t want to be a millionaire? What about a billionaire or a trillionaire? The latter is the theme Red Tiger Gaming used in its latest slot simply titled Trillionaire. A Fashion TV-based slot for all those fashion-icons-to-be, Trillionaire is a great-looking real money slot game. While it doesn’t pay trillions of coins at the highest wagers, it’s still a rewarding slot for aspiring fashion icons and designers.

Like all Red Tiger releases, it’s slot that looks and plays great. On the surface, nothing looks unusual. Scratch beneath it, and you’ll find the slot very satisfying. The video slot is played on 5 reels with 20 fixed paylines with a maximum winning potential of 1,000x your wager.

Play Trillionaire for real money right now and you can book your spot on the gala shows sponsored by Fashion TV.

At first glance, the Trillionaire slot doesn’t look anything out of the ordinary. It has five reels in four rows and an animated glittery background that’s obviously a nod to Fashion TV’s best jewellery. On the reels themselves, you’ll find glittery symbols too, including stylized card royals made of rare gems, and of course, some of Fashion TVs stars.

Before the slot begins, the intro shows a supermodel singing the official channel’s song which adds to the authenticity of the slot. All of the girls act as wilds, and the Fashion TV log is a scatter. The girls pay differently too up to 150x your wager in the base game.

The action is followed by a booming electro soundtrack that will immerse you into it deeply just like the popular TV channel.

The Trillionaire slot is available for free or real money on all Android and iPhone devices. You can give it a go via your browser by simply visiting your favourite mobile casino.

How to Play the Trillionaire Online Slot

To play the slot, you’ll have to invest some gems yourself. The wagers go from €0.10 to 100 per spin, more than suitable for new and experienced players. Hit the Spin button when ready and watch the reels take a glamourous turn. As mentioned earlier, the supermodels come in regular and wild mode. When a wild lands, it can pay up to 200x your stake for five of a kind and substitute for other symbols in winning combinations.

Otherwise, the symbols pay according to the paytable. The action in the base game is pretty straightforward. There are three features that can boost your wins. The first is the already described wild feature, the second is a free spins round, and the third is a wheel spin with mega cash rewards across the sections.

Land at least three scatters in the Trillionaire online slot to trigger the free spins. You’ll get 8 free games in total with all low-win symbols removed from the reels. Before the feature begins, you choose one of the 5 supermodels. This symbol will then turn to a nudge wild that can turn a full reel wild.

The other feature comes by way of the bonus wheel symbol. Land them on reels 1, 3, and 5 simultaneously, and you’ll get a free spin on the bonus wheel with 4 sections of cash rewards. If your spin lands in the first circle, you’ll win a reward 5x your wager.

If you’re lucky enough that it lands in the 4th, a prize worth 1,000x awaits. The features may not be as plentiful as in Red Tiger's Gonzo's Quest Megaways, but there's more than enough for slot players to be satisfied.

The Trillionaire slot RTP is set at 95.76% which is a bit lower than the industry average. The slot is highly volatile and has a maximum winning potential of 1,000x your stake.

Trillionaire is a brilliant slot for all those fashion aficionados. It portrays all the glitz and glamour of Fashion TV with supermodels that look fantastic. Thanks to three different features, this isn’t yet another fashion-inspired slot at top online casinos. It can be quite rewarding, especially if you get the wheel spin often.