Treasure Island is one of the richest Quickspin slots in terms of features, as it offers five types of Wilds and two bonus rounds, each with additional levels and features. This is ... Read Full Review 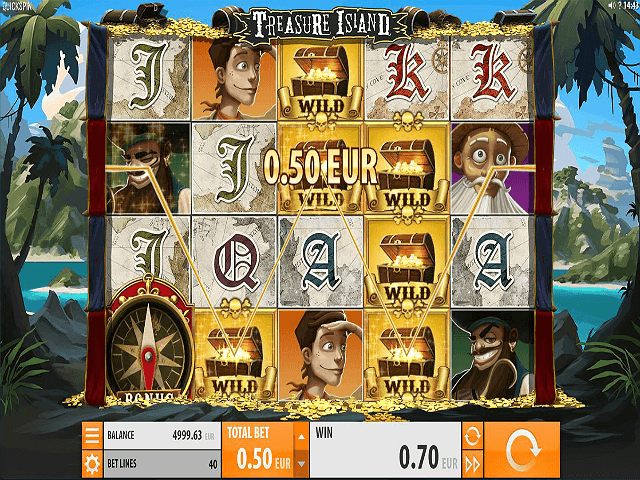 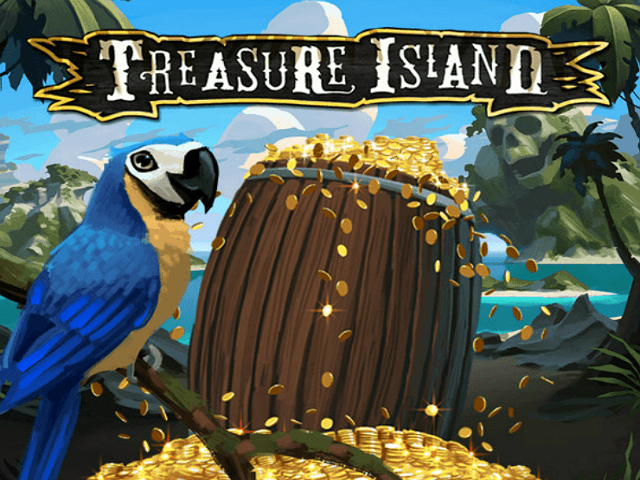 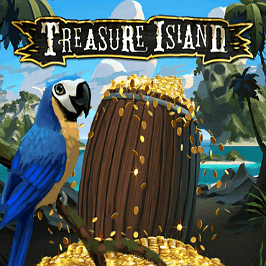 Treasure Island is one of the richest Quickspin slots in terms of features, as it offers five types of Wilds and two bonus rounds, each with additional levels and features. This is among the best pirate-themed slots and it has excellent theoretical payout, too!

The game is played on a large 5x4 board with 40 fixed paylines that pay from left to right, and your bet can range from €0.50 to €100, which means that the minimum bet per payline is €0.0125. You can check out the game rules by clicking the ladder icon, but perhaps it's best to just start spinning the game and learn through practice how does each of the five Wilds behave and what do the bonus features do. Just choose your bet, jump in and let this game play out for you.

There are ten normal symbols in the paytable, and five of them are card symbols – probably the most beautiful ones you'll get to see in slots as each symbol is placed on an old style world map. These symbols can get you your stake back if you land five-of-a-kind, and anything less than that will just issue get you a small fraction of your stake back. The five main characters don't pay much better either – 1.5x, 2x or 3x for five-of-a-kind – and the paying Wild is the only symbol that stands out with a 10x prize.

Two or more Barrel Wilds on the board will initiate the Pirate Attack. A pirate ship will fire two to four cannonballs which will produce some more wilds. This is a common sight on your reels. The game has four more types of Wilds – Stacked Wilds, Extra Wilds, SuperWilds and Locked Barrel Wilds. Only the first two appear in the main game, and the latter three appear in the free spins game.

When three Bonus Scatters land on your reels – which is quite common – you'll get to pick one of the Scatters and this will determine if you get a small cash prize of 2x your bet, the Free Spins game or the Treasure Hunt game.

If you get the Free Spins game, then before that you'll be presented with 16 Islands to pick, and there you can get some additional features for the free spins, as well as an increased number of free spins and some small cash prizes. You start with 6 free spins, and to get more you need to pick the right Islands. Extra features you can win are Extra Wilds where from 1 to 3 regular symbols will transform into Wilds, Super Wilds where you'll get super stacks of Wild symbols, and Locked Barrel Wilds where Wilds from explosions in the Pirate Attack bonus remain locked.

In addition to all these Wilds and the free spins game, there's the Treasure Hunt game in which you pick your prize among five X marks on the ground, and if you pick the right one then you enter Ben Gunn's cave for a chance to win some extra large cash prizes.

Not only that this game doesn't look like it was released back in 2013, but it remains one of the more visually appealing Quickspin slots. Card symbols and Scatters look great, and the bonus features are just stunning. If the theme won't lure you in then the 97.07% theoretical return to player should, as this is one fun and rewarding bonus game that definitely deserves to be played for real money. Pick a good Quickspin casino like you're picking those X marks, and you'll enjoy a great pirate game.