The apocalypse is now, or so we are led to believe. Prepare for the fright of your life, as the world comes crashing down in a similar fashion to the original The ... Read Full Review 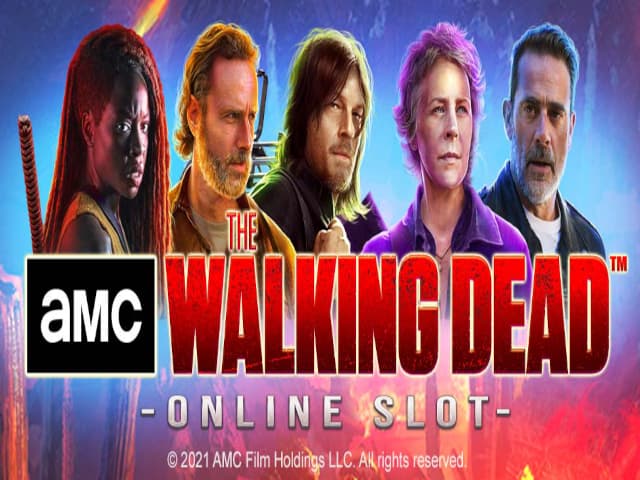 The apocalypse is now, or so we are led to believe. Prepare for the fright of your life, as the world comes crashing down in a similar fashion to the original The Walking Dead hit TV series. The real question that Playtech’s slot creation poses is, will you be able to survive a living nightmare alongside the deadliest species of them all at the most popular online casinos. The challenge lies in this 5-reel, 3-row, and 50 paylines online slot, where your expectations should be nothing of thrills, chills, and more.

The outstanding design of the game is centred around the zombie apocalypse, oozing city-on-fire appeal, where the original stars of the show, such as Rick Grimes will be making his star-studded symbol appearance throughout the game. He’s one that you’ll definitely want to be getting your hands on to unlock some serious real money rewards.

Players will see popular characters from the Walking Dead TV Show appearing in the slot as some of the best symbols to land within the game. Rick Grimes is your number one, as landing 5 of these symbols pays 3x your stake. Collecting a minimum of 5 of the Carol, Daryl, Michonne or Negan character symbols pays 2x the stake. The letter A Symbol pays 1.5x the stake and the letters K, Q, and J all pay 1x the stake for a total of 5 within any one symbol combination.

It’s worth noting that there are several Bonus Symbols that you’ll want to watch out for in this bloodbath of a challenge. The Wild symbol appears as a blood-soaked hand and can substitute for all symbols paying 3x the stake. To trigger the Free Games Feature, collect a minimum of three of the 3 Shield Scatter Symbols. The shiny Golden Coin Symbols can trigger the thrilling Tower Feature when you land a total of six or more. The Golden Key Coin will add further enhancements to the Tower Feature by adding additional rows. The Biohazard Coin Symbol is the real deal since it can unlock Jackpot Bonus features.

How to Play The Walking Dead Slot

For the real thrill to begin, simply adjust your wager by increasing with the (+) button or reducing with the (-) button, both of which will appear in the centre of the screen. To start the game, press the round button with arrows and the spin will begin.

The stake range begins from 0.10 and can be increased to 500.00 in your chosen currency.

The Walking Dead slot has been created with advanced HTML5 technology, meaning that players can choose to play from mobile or tablet devices, laptops, or desktops. This particular mobile slot has been optimised for Windows, iOS, and Android devices.

There are a total of six bonus features to unlock within The Walking Dead slot. These consist of the Tower Feature, 4 different types of Fixed Jackpots, 5 types of Free Spins Features, Stacked Coin Symbols, Multipliers, Respins, and Wild Reels.

After 6 free spins are awarded, an additional wheel will appear and will randomly select 1 out of the 5 free spin features. When any of the features have been activated, the 3 or more Scatters will award an additional 6 free spins.

Read on below to find out what each of the individual features offers.

Alexandria Free Games Feature. During the Alexandria Free Games feature, any stacks of coins landing on the reels will lead to a respin. The slots free spins will be paused and the respins will be active, moving the stacks from single positions to the left on each respin. In the event that three or more Coin Symbols appear within the stack, the stack will then activate the Tower Feature. The respins will take place on a continuous basis, either until the stack of coins disappears from the reels or if the Tower Feature has drawn to a close.

The Walking Dead slot is considered a medium-volatility adventure with a default RTP of 95.73%. The maximum payout when playing this game is capped at a rather low, 2,198x the original stake.

The question is… should you prepare for the fright of your life? The answer is definitely. Expect all those thrills and chills from the original TV series to manifest themselves into the game having quite the effect, and the theme and soundtrack lend themselves very well.

Join the iconic zombie-fighting gang in The Walking Dead slot with the best slots bonus!

When was The Walking Dead slot released?

The Walking Dead video slot was released in 2021 by the slot developing team at Playtech. Playtech is one of the best slot developers in the industry that created the Age of the Gods and the Fire Blaze Classics slot series.

What is the RTP in The Walking Dead online slot?

The Walking Dead video slot has a maximum RTP of 95.73% as a medium-volatility video slot.

What is the maximum win in The Walking Dead slot?

Players can expect to achieve maximum wins of 2,198x their original stake in The Walking Dead video slot.

What is the best online casino where I can play The Walking Dead slot?

The Walking Dead online slot can be accessed from all premium online slot sites that offer the best Playtech slots – it’s just about you choosing your top casino site. Find the list of the most popular slot sites on SlotSource.

What online slots are similar to The Walking Dead?

If you are a die-hard fan of zombie apocalypse slots, then you’ll love NetEnt’s Zombies or Pragmatic Play’s Wild Walkers for even more blood-filled quests.

Is The Walking Dead a high volatility slot?

No, The Walking Dead is considered a medium-volatility slot, so there is not a huge amount of risk involved.

Should I always wager the maximum amount on The Walking Dead slot?

No, you can place a wager that suits your individual budget and abilities.

What’s the most I can wager in The Walking Dead slot?

The maximum wager is capped at 500.00 in your chosen currency when playing The Walking Dead video slot.

What kind of slot symbols will I find in The Walking Dead slot?

There are all sorts of intriguing symbols to be found in the Walking Dead slot. Keep your eyes peeled for the usual suspects such as the Wild and Scatter. But there are a number of special symbols appearing as Golden Coins, which will act as real game-changers if you’re lucky enough to land them.