Prepare to go back in time to experience life in medieval times in the&nbsp;Templar Tumble slot by Relax Gaming, and if you’re fit to fight the many battles then you may just ... Read Full Review 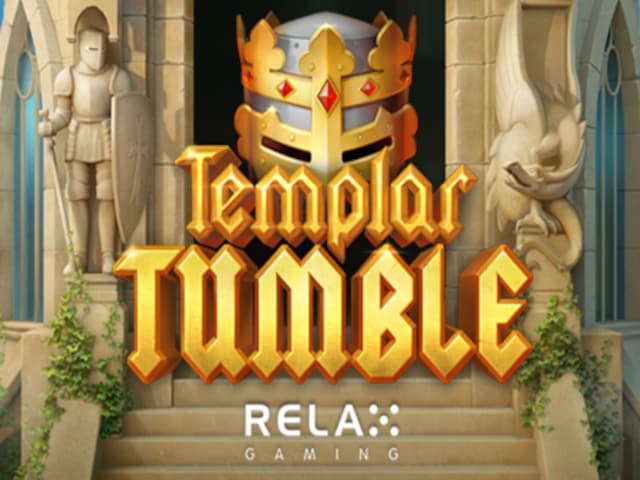 Prepare to go back in time to experience life in medieval times in the Templar Tumble slot by Relax Gaming, and if you’re fit to fight the many battles then you may just be knighted. The mission is set against an ancient cathedral, guided by statues made of stone, which should encourage you to play well and even more so since history has its eyes watching over you. The concept is based upon the Knights Templar military order, which was largely involved in a range of important battles, which took place in the holy land, some few centuries ago. The soundtrack is something you’d expect from an ancient orchestra, blending well with this theme, all elements will prepare you for the battle well.

The Templar Tumble slot is set against a lush countryside backdrop, with the most overpowering ancient cathedral taking centre stage, surrounded by statues and a 6x7 grid that forms the perfect battleground. You will notice how some of the reels remain blocked, whereas some have symbols completely visible, making way for even more wins and cascades throughout the game.

Winning symbol combinations can be formed anywhere on the adjacent reels, starting from left to right. It’s worth unlocking the blocked reels, as these create even more ways to win, and since there are up to 117,649 ways to win in this marvellous megaways slot, you’ll want to jump at the chance to create space for even more rewards.

The cobbled blocks on the reels will present a range of symbols that match well with the theme. The lowest-paying symbols appear as glistening gems, whereas, the higher-paying symbols will reveal icons such as the tree of life, the red cross, and most importantly the knight helmet which will pay 2x the stake when you have landed a total of 5 as part of the same winning symbol combination.

How to Play the Templar Tumble Slot

All features and menus are easy to navigate on the dashboard which is located at the bottom of the screen, where players can access additional information, paytables, audio, and wagering settings. The stake can be increased or decreased using the (+) and (-) buttons located on either side of the Bet menu. Players can place their bets from as low as 0.10 and can increase to a maximum wager of 50.00 in their respective currency. When the wager is set, you’ll be ready to hit the spin button, which is placed within the centre of the screen.

The Templar Tumble video slot has been well optimised utilising HTML5, meaning it’s accessible on pretty much all types of devices, ranging from mobile smartphones and tablets to laptops and desktops, all of which need to be supported by iOS, Android, and Windows software. It’s never been easier to enjoy the battle from practically any place on earth at your favourite iPhone slots site or Android casino.

Templar Tumble has a total of three additional bonus features to offer its players. The Free Spins and Mystery Symbols have the most to offer, as the highlights of the Bonus Round. As the name suggests, there is a Tumbling Reel Feature, which takes place continuously and will not end until there are no new symbols appearing on the screen. The tumble works by replacing all winning symbols with brand new symbols from above, as a result, this leads to even more winning combinations and increases the number of ways to win.

The Mystery Reveal Feature is dependent upon the Wild Symbols, landing between reels 2 and 6. Secondly, between reels 3 to 8, all of the blocked symbols will then transform into Mystery Symbols. All of these symbols will stay on the grid until a tumble occurs.

The Free Spins Feature can only be triggered when all blocked symbols have become unblocked on the grid. When the feature triggers, players will be awarded 6 Free Spins, as well as the maximum 117,649 ways to win will be in action.

Templar Tumble is a medium-high volatility slot, which offers players a slightly higher than average return of 96.25%, offering a fairly decent return to players. The maximum win potential can reach up to 17,280x the wager, which is fairly outstanding, but we’d expect nothing less with the addition of the Megaways mechanic which offers hundreds of thousands of ways to win.

The Templar Tumble certainly meets our expectations in terms of the possible return, maximum win potential, and very interesting bonus features, which can definitely reveal some spectacular wins. The only thing that irked us ever so slightly was the lower-than-low symbol payouts, however, with the addition of continuous tumbles and the appearance of Mystery symbols, we still manage to collect plenty of rewards and instant cash prizes – consider this a win for your side.

Well if you were successfully knighted throughout the Templar Tumble slot, then we’re guessing you’ll be needing a brilliant new battle from the same series. Check out Temple Tumble 2 or Temple Tumble 2 Dream Drop.

When was the Templar Tumble slot released

Relax Gaming released the epic Templar Tumble slot in December 2020, bringing a whole new battleground to the market, lined with dozens of benefits in the form of instant cash prizes and more.

How much can I win with the Templar Tumble slot?

The maximum multiplier win can reach as high as 17,280x the original wager, which is good news for players who are looking to score high on the leaderboard and we’d say there’s every chance of winning big with the Templar Tumble slot.

Which casino should I choose for playing the Templar Tumble slot?

Templar Tumble is available to play at all of the top online casinos, however, to get the most out of your experience, we’d recommend choosing a casino, which offers the best bonuses which can be applied to the slots you play.

What is the volatility of the Templar Tumble slot?

The Templar Tumble slot is listed as a medium to high variance slot, so consider it somewhere in the middle when weighing up the pros, cons, risks, and rewards of playing any video slot.

What is the maximum RTP of the Templar Tumble slot?

The Templar Tumble online slot offers a lower than average but decent return of 96.25% which is fairly standard for any online slot game, but even better is the overall winning potential waiting to be discovered within the slot game.

Is there a demo game for the Templar Tumble slot?

Yes, when you’ve chosen your favourite casino to play Templar Tumble with, you’ll be able to access a free demo version of the game, to give you a little taster of what’s to come without needing to take any risks until you’re 100% sure that it’s the right game for you.

Can I buy Free Spins in the Templar Tumble slot?

Unfortunately, it is not possible to buy Free Spins when playing the Templar Tumble slot, although, there are plenty of great additional bonus features to trigger and focus upon.

What special bonus features does the Templar Tumble contain?

Players will find Mystery Symbols, Free Spins, and more added to the list of bonus features when playing the Templar Tumble video slot.

Can I win real money prizes with the Templar Tumble slot?

Yes, yes, and yes again! You can win dozens of real cash prizes when playing the Templar Tumble slot for real money at the top-rated online slot sites, and with a whopping 117,649 ways to win when playing the game.