Holiday seasons mean traditions such as spend with our families and gifts. We’re definitely excited by the gifts. If you’ve been a good boy or girl this year, Santa will bring ... Read Full Review 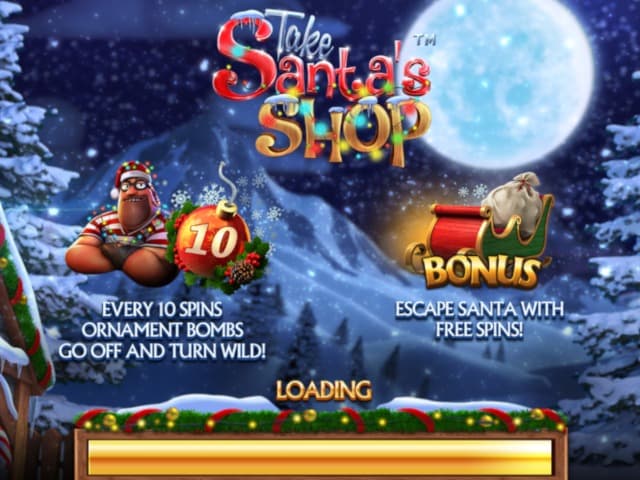 Holiday seasons mean traditions such as spend with our families and gifts. We’re definitely excited by the gifts. If you’ve been a good boy or girl this year, Santa will bring you a bag of presents earlier in Take Santa’s Shop from Betsoft online slot games.

A Christmas-themed slot with five reels and 75 paylines, Take Santa’s Shop does not pay big – it’s focused on holiday cheer. The Take Santa’s Shop online slot comes packed with pleasant surprises and a top prize worth 359 times your bet. You will win a nice reward for your efforts with Santa’s little helpers and enjoy the holiday fun the slot offers.

Betsoft has so far released plenty of hits in the industry and Take Santa’s Shop aims to be the latest. If you’re already in Christmas mood, this is the slot you should play for real money.

At first glance, there’s nothing unusual about the Take Santa’s Shop online slot. It has five reels in three rows with Christmas-themed symbols all over them. You’ll see the gingerbread man, candies, a gift sock, horse toy, and of course, lampoons.

You’ll also see Santa on the reels as well as a Robber. The latter is converted to ornament bombs that stay locked in place on the reels until the countdown timer reaches zero. Santa’s Sleigh is the bonus symbol which triggers the free spins round.

The highest-paying real money slots symbols are the snow globe and gingerbread man. They pay 3x and 1x for five of a kind respectively. The card royals are low-paying symbols, each on delivering significantly lower-prizes than the others.

All Betsoft releases are fully compatible for mobile play and Take Santa’s Shop is no exception. The slot works perfectly on Android and iOS devices and thanks to navigational shortcuts, you will have no trouble spinning it on the go.

How to Play the Take Santa’s Shop Slot

At its core, the Take Santa’s Shop online slot is very simple to play. The action starts when you set your bet. You can go for a minimum of 0.20 all the way up to 20 credits per spin. Keep in mind that the game has 75 paylines. There’s also a bonus buy feature that will take you straight to the bonus round, but will cost you a lot.

Hit the spin button once your bet is set and watch out for the robber. Whenever he appears, those symbols will be turned to countdown ornament bombs. It starts at a count of 10 and decreases with each spin. When it hits zero, the bomb will explode and possibly bring you bombastic wins.

Three Santa’s Sleigh symbols will bring you 15 free spins. During this round, the ornament bomb countdown will stop and 5, 7, or 10 epic wild symbols will be added to the reels. With each spin, the wilds will move to a new spot on the reels, increasing your chances to hit a big win.

Thanks to this, you can get your hands on some pretty great rewards. That’s the only special feature the bonus round offers, but it’s more than enough to get you on your way to the 359x top prize.

Betsoft’s Take Santa’s Shop slot has an RTP of 96.08%. The medium-variance slot’s maximum winning potential is 359 times your stake, for a frankly very low max payout of 7,180 credits. But this slot is all for holiday cheer, not legendary rewards. Check out our best slots bonuses to get started.

If you’re in the mood for some holiday cheer, Take Santa’s Shop is fun. It’s a game with solid bonus features that can pay over 350 times your stake, albeit a very low max payout. Spin its reels for real money right now at best slot sites and you’ll be riding in Santa’s sleigh before you know it.