The Sizzling Eggs slot comes with an otherworldly theme, drawn from the mythological Phoenix bird. The action begins to play out in the nest-filled habitat of this fiery, fortune-filled bird, and everything ... Read Full Review 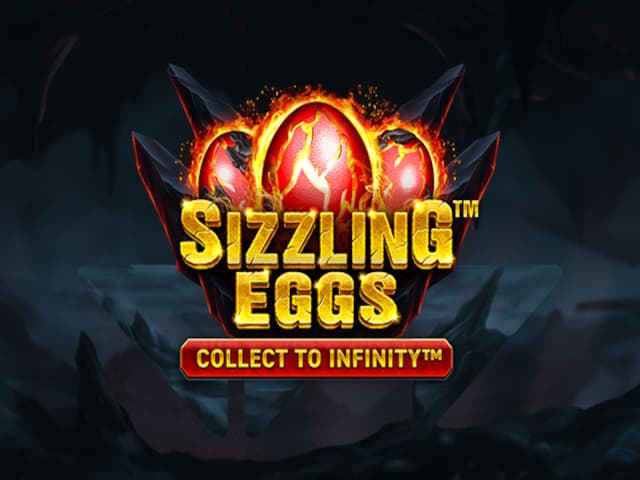 The Sizzling Eggs slot comes with an otherworldly theme, drawn from the mythological Phoenix bird. The action begins to play out in the nest-filled habitat of this fiery, fortune-filled bird, and everything revolves around her sacred eggs. The Egg symbols are the most precious, serving as the Collector symbols, and appear on the super special top reel exclusively.

The visual presentation is vibrant and fresh, boosted by a satisfying color scheme, with the usual punchy fruit machine symbols set neatly against a deep shade backdrop. Players will be able to choose their preferred speed and also with the volatility, which is a usual trait with any Wazdan slot. On top of that, you can win up to 2,500x your bet in the Bonus Round. It’s all reliant upon collecting cash and jackpots by landing the top-reel Egg symbols, and these can be upgraded from 1 out of 3 of the unique modifiers.

Look for the Sizzling Eggs slot at the most popular slot sites.

In perfect alignment with the game's fiery themes, most of the slot symbols will appear with an added dose of sizzle and sparkle. In terms of the most game-changing symbol of all, is the shining star Scatter Symbol, where collecting 3,4, or 5 of the Scatters will award 10, 20, or 30 free spins. In the event that the scatters land when the free spins have been activated, players will be awarded a second batch of 10,20, or 30 free spins, depending upon the number of symbols collected.

The Wild Symbol, in all its vibrance, contains the power to replace all other symbols except for the Scatter and Special symbols.

Out of all the special symbols, pays special attention to the Collector Symbol, which is characterised by a crackling egg. It comes with a 110-second-timer, which allows all cash and jackpot rewards to be retrieved within that time frame. The Collector Symbols also appear in the form of a crackling egg, however, the difference with these symbols is the additional icons or multiplier amounts specified within the egg. All Collector Symbol payouts will be released at the end of the Free Spins Feature.

How to Play Sizzling Eggs Slot

Flying into the Phoenix nest and nesting until you have managed to snag every last egg is possible - since this slot embodies a ‘gameplay made easy approach.’ The paytable, betting menu, volume control, and other controls are located at the bottom of the screen. The minimum wager starts from as low as 0.10 and increases to a minimum of 100.00, in the player’s respective currency.

The Sizzling Eggs slot is never too hot to handle, thanks to the backing of 5HTML. The mobile slot can be enjoyed from just about any iOS, Windows, or Android device. Choose to play from your mobile smartphone, tablet, laptop, or desktop, and prepare to be challenged by these cranky creatures.

The top symbols pay between 1.5 to 50 x your stake for 5 same symbol wins, and the Wild Symbol steps in alongside the regular pay symbols to help complete wins. The Wild can appear on any of the 5 reels, and it does not hold any value of its own. You can land unique special symbols within the base game, but none of them award a payout unless they’re carried over into the bonus game.

The Bonus Round triggers when you land 3, 4, or 5 Scatters anywhere in view, and this gives you 10, 20, or 30 free spins, accordingly. The feature can be retriggered, and any special symbols present on the triggering spin are carried over into the Bonus rounds. Here’s how the Special symbols work:

Collector Egg Symbols (top reel only). They come with a random countdown value of 1 to 10 and accumulate all values from cash and jackpot symbols on the reel below until the countdown reaches zero.

Cash Symbols. These symbols appear with values between 1x and 10x your stake.

Collector Countdown Booster. The feature adds +3 to the countdown value.

Collect to Infinity. It allows the relevant Collector Egg to collect values for the remainder of the Bonus Round.

The deep, dark bird cave setting, and the smoking hot Phoenix bird eggs, match surprisingly well together with all of the classic fruit symbols, and, the pace of the game is more or less exactly like you want it to be thanks to beyond adjustable settings to choose from. The same goes for the slot’s volatility, and top-up wins of up to 250x your stake can be awarded from a single spin.

If you enjoyed Sizzling Eggs, you’ll love Power of Gods: Valhalla by Wazdan, which offers even more jackpot wins within the base game, where higher payouts will come from the bonus rounds in Sizzling Eggs.

The best part is how the collector symbols can be changed by 3 unique modifiers, and the Collect to Infinity feature adds even more fuel to the fire. The 2,500x potential is fairly standard, but Wazdan should consider increasing it or perhaps adjusting the volatility settings to substantially increase winning potential. Would we head back into the next? We totally would for all epic features and the many hidden prized payouts, which may leave us overlooking the diluted payout potential.

Who created the Sizzling Eggs slot?

The Sizzling Eggs slot is an epic game created by Wazdan, a top slot game software provider and a major player within the iGaming marketplace known for their popular creations such as Magic Spins, Sun of Fortune, and Power of Gods: Valhalla.

When was the Sizzling Eggs slot released?

The Sizzling Eggs slot was released in 2022, making it an epic and fairly new release to the online game market for all to enjoy.

Is the Sizzling Eggs slot considered to be a high volatility creation?

The Sizzling Eggs slot contains an adjustable volatility feature, which is a signature feature within most Wazdan slots. Players have the power to adjust the volatility of the game from low, to standard to high, depending on their requirements and style of play.

What is the maximum wager when playing the Sizzling Eggs?

Players can place a maximum wager of 100.00 in the Sizzling Eggs slot, using their respective currency, depending upon their budgets and courage to take the calculated risk, with a view to reaping the many rewards hidden within the game.

What special symbols will I find in the Sizzling Eggs slot?

The cash, jackpot, and collector symbols are the special symbols appearing within the game. These symbols will usually appear within the base game, but can also appear during the Free Spins, where they can offer cash rewards in the Sizzling Eggs slot.

Is there a Jackpot feature in the Sizzling Eggs slot?

Yes, the players can land fixed jackpot wins when playing the Sizzling Eggs online slot machine game, by landing one of the Jackpot symbols labelled with MINI, MAJOR, MINOR, and MEGA, all of which lead to various fixed jackpot wins.

Can I play the Sizzling Eggs slot for free?

Which is the best online slot site to play the Sizzling Eggs slot?

There is no right or wrong in terms of online casinos to play the Sizzling Eggs slot. We’d recommend shopping around to see which slot sites have the best bonus offers up for grabs, as this can only enhance the online slot experience when there are extra goodies up for grabs.

Is there a Free Spins Feature in the Sizzling Eggs slot?

As a standard requirement and with most online slots, the Free Spins is one of the most prominent bonus features within the Sizzling Eggs slot game. Players can land up to 30 Free Spins, depending upon the amount of scatter symbols collected.

What is the maximum multiplier payout when playing the Sizzling Eggs slot?

Players who manage to play their way to a lucky future may just find themselves on the receiving end of jackpot wins, worth an estimated 2,500x the original stake – which isn’t too bad given the nature of this sizzling hot slot.