Shimmering Woods is not exactly the most inviting name for a slot. It kind of sounds ominous to us, but a glance at these magical woods will tell you that it’s safe to enter. Pla... Read Full Review 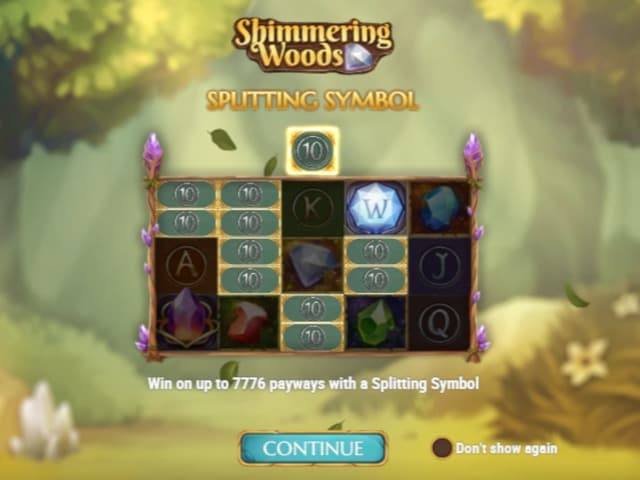 Shimmering Woods is not exactly the most inviting name for a slot. It kind of sounds ominous to us, but a glance at these magical woods will tell you that it’s safe to enter. Play’n GO’s latest slot called Shimmering Woods is a pretty great magical adventure through an enchanted forest that hides many surprises.

A 5-reel slot with massive winning potential, Shimmering Woods follows the Play’n GO guidelines to the letter. It’s got great graphics, fun gameplay, and most importantly, high-paying features. Enter these woods for real money in our top online casinos and you’ll enjoy your time spent in the shimmer.

Shimmering Woods is a 5x3 slot with sharp graphics. That’s not a surprise considering the fact it’s a Play’n GO slot game. All of the studio’s slots look perfect and this one is followed by great music audio too. The reels are expectedly set against a background of magical woods with colourful crystals flanking the reel frame.

There’s a variety of gemstones that act as the game’s high-paying symbols. The best one pays a suspiciously low amount of 3x for five on a line. However, keep in mind that the starting 243 ways to win can be expanded and dynamic multipliers can greatly increase your wins. The game uses a wild and scatter too, each one playing their respective roles.

Shimmering Woods is fully optimized for mobile devices. Play’n GO is known for its mobile slots available without the need to download. Shimmering Woods plays like a charm on Android and iOS devices, so you shouldn’t have trouble spinning the reels.

Before you start spinning, you need to set your wager. The default setting puts it at 0.80, but you can select between 0.20 and 100.00 per spin. Once you hit the Spin button, the symbols will disappear from the reels with a nice animation.

The base gameplay is pretty straightforward, with a few special features to spice things up. First come the Cascading Reels which every slot fan knows and loves. This feature removes winning symbols and replaces them with new ones, giving you a chance to score a new win. As long as there are win combos landing on the reels, the cascading wins multiplier will go up by 1. Between losing spins, it will reset.

Before the start of each spin, a random symbol will be highlighted in the box above the reels. This is the Splitting Symbol which does what it says – it splits into two when it lands on the reels. It also increases the number of reels and ways to win. You start at 243 per spin, but that number can go as high as 7,776.

At the same time, any active splitting symbols from the base game can be transferred to the bonus round. The highlighted symbols won’t reset on losing spins. The win multiplier will still reset, but the feature is active in the free spins round.

With the highest number of multipliers in play and all active features, the free spins round highlights the true winning potential of the Shimmering Woods slot.

The RTP of the Shimmering Woods online slot is set at a respectable 96.2%. It’s a slot game of medium to high volatility with a maximum possible win of 25,000x your stake.

Play'n GO has another big hit in the Shimmering Woods slot. It’s a well-rounded slot with sharp graphics and cool gameplay that pays more than the studio’s latest releases. With special features such as Cascading Reels and Splitting Symbols as well as multipliers, your journey in these magical woods will surely be blessed.

The Shimmering Woods slot has been developed and released by Play’n GO. The popular studio is one of the most respected in the industry and behind many hits.

What’s the RTP in the Shimmering Woods online slot?

The RTP of the Shimmering Woods slot is set at 96.2%, which is a bit over the industry average. That’s the sweet spot for medium-high volatility slots and a pretty reasonable rate.

Is the Shimmering Woods slot a high volatility game?

The Shimmering Woods is a medium to high volatility game. This means that it pays varied wins, with solid chances to hit a bigger win.

Is Shimmering Woods a Megaways slot?

No, the Shimmering Woods is not a Megaways slot. However, it does feature the Cascading Reels mechanic, allowing you to hit win after win.

What features does the Shimmering Woods slot have?

The Shimmering Woods has several special features, with Cascading Reels the main one. It also features Splitting Symbols and a free spins round with multiplier modifiers.

How many paylines does the slot game have?

The slot has 243 betways to start with, but those can expand thanks to the splitting symbols feature. The maximum number of ways to win is 7,776.

Can I win real money when spinning the Shimmering Woods slot?

Yes, you can win real money if you play the Shimmering Woods slot for real money. You can win some pretty solid sums of cash if you’re lucky, and you land the right symbols and activate the right modifiers.

Does the Shimmering Woods online slot have a jackpot?

No, the slot doesn’t feature a jackpot. However, with all features active in the bonus round, you can hit a win of 25,000x your stake, which is much bigger than what some jackpots offer.

Can I play the slot on my mobile phone?

Yes, you can. No need to download an app to play the Shimmering Woods online slot. It’s available on instant-play platforms and very easy to access and play on your smartphone.

Why is the Shimmering Woods slot popular?

The Shimmering Woods slot shines with its special features and its skyscraping winning potential. The opportunity to win over 25,000x your wager is something not many slots offer, and that’s why players love it.