Second Strike is a 5x3 fruit slot with 10 fixed paylines, released by Quickspin in 2015, that has a unique feature of an outer wheel that can put 6, 8 or 10 additional symbols on y... Read Full Review 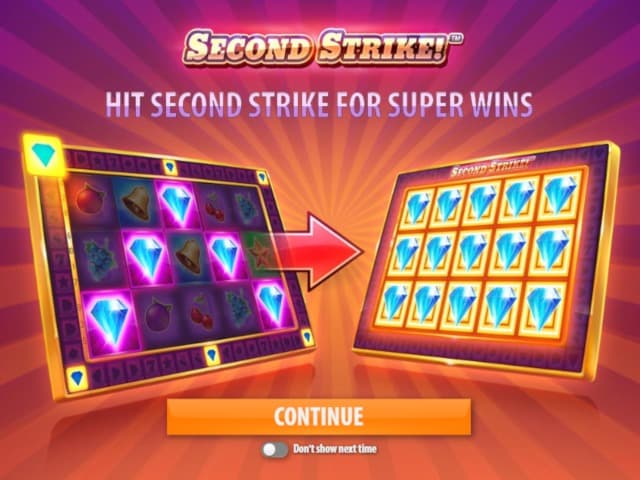 Second Strike is a 5x3 fruit slot with 10 fixed paylines, released by Quickspin in 2015, that has a unique feature of an outer wheel that can put 6, 8 or 10 additional symbols on your reels in order to help you get that big win! That's the only bonus feature of this simple yet powerful game.

Just like any other Quickspin game, Second Strike is easy to set up. The 10 paylines on your 5x3 board are fixed so all you need to do is to choose your bet per spin. Bets can range from 0.10 to 100.00. This is a simple game with exactly one bonus feature as explained below. So it's best to just start playing the game by clicking Spin or even Autoplay if you wish, the game is very simple and that's why it plays well on both desktop and mobile devices.

Diamond is the most valuable symbol as it pays a whopping prize of 100x your bet, so the maximum possible win on a single spin in this game is 1000x your bet. Seven, Star and Bell are the medium value symbols and they can pay 20x, 15x and 10x respectively. The four fruit symbols – Watermelon, Grapes, Plum and Cherry – aren't worth much and they can pay 4x at best. There is also a non-paying Wild symbol that can help a lot.

With this kind of paytable and a very generous Diamond symbol, as well as the game mechanics that can help you land that full board win whenever you land five-of-a-kind, Second Strike is a great game in which you can win big. Variance is, of course, a bit high, but the potential to win big is here and that's uncharacteristical for Quickspin. So if you want invest real money and play a Quickspin slot in which you can win big, this would be the one. Actually, this would probably be a slot game in which it's the easiest to get a full board win. Simply land five-of-a-kind and have a marker land on one of the highlighted positions, and you got a board full of the same symbol.

It gets even easier if you happen to land more than one winning combination on the spin, as then all the symbols will light up on the outer wheel, and your chances of getting extra symbols double. Whenever you get extra symbols, they will be placed on your board randomly.

Second Strike was released in 2015, and there's also a newer version of this slot game called Joker Strike that was released in 2018. The games are very similar, except that Joker Strike has a Hi Roller game with a fixed bet and improved payout. Both games pay roughly the same, and the theoretical payout of Second Strike is 96.22%. It's not the best payout Quickspin ever offered, but it's good enough, and there's a decent chance of winning big in this slot game so that makes it worth your while. Choose a top Quickspin casino and play this game if you're into high variance fruit slots.