Samba Carnival is a classic slot with a Brazilian theme, released by Play'n GO in 2016, and it doesn't have a free spins game but it has Wild win multipliers that can multiply your... Read Full Review 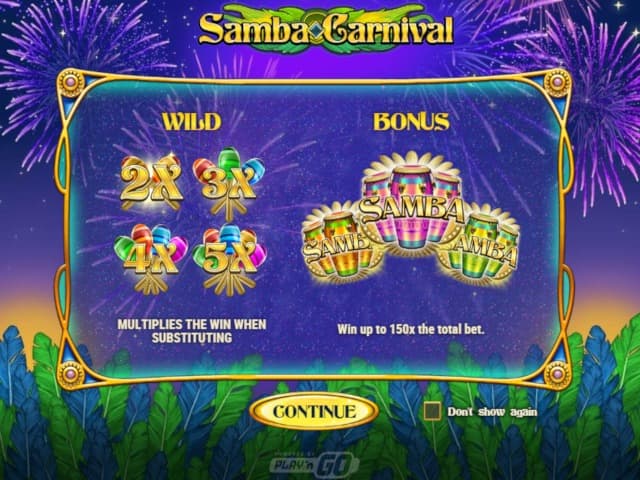 Samba Carnival is a classic slot with a Brazilian theme, released by Play'n GO in 2016, and it doesn't have a free spins game but it has Wild win multipliers that can multiply your win by up to 5x and there's an already generous paytable in this game!

Samba Carnival is a slot game which uses older technology even though it was released in 2016, and that means the game won't be very playable on mobile devices. You should play this one on a desktop computer, laptop or a large tablet. The game uses coins, so you can choose from 1 to 5 coins per payline, you can select from 1 to 15 paylines, directly affecting the variance of your slot, and the coin value can be from 0.01 to 0.25. This means the maximum bet per spin is only 18.75, and the minimum that covers all paylines is 0.15. The game can also be played for 0.01 per spin if you choose only one payline. There is no Fast Play available, so you can only choose to Spin the reels individually or use Autoplay.

For a bet of 15 coins on 15 paylines, the four Fruit symbols will only be able to give you a small fraction of your stake back for a three-of-a-kind win, as the win will be 3, 4, 5 or 10 coins. For a four-of-a-kind win you won't be able to make any money unless the symbol you landed is Pineapple, in which case you'll get 50 coins or more than 3x your total bet.

In addition to this, the game has four different types of Wilds that bring a x2, x3, x4 and x5 win multiplier when they're part of the winning combination. All Wilds are a very rare sight on your board, but when they do land they'll make the most of this generous paytable. It's possible to win more than 800x your bet with that x5 win multiplier – on a single winning payline.

Samba Carnival doesn't have a free spins game, it is replaced by a bonus round that is triggered when you land three Samba Scatter symbols. It's not really much of a game, as you'll just get to pick one of the three symbols to reveal a prize that can be up to 150x your bet. But despite this bonus game, the multiplier Wilds are the real stars of this slot game and the main thing you'll be on the lookout for. A few Pink Dancers and a Multiplier Wild can bring you a huge win if you're playing for real money.

Samba Carnival is a good classic slot that has higher variance but can really produce mega wins, even on a single payline, because of the win multiplier Wilds that can boost the already generous paytable by 2x, 3x, 4x or 5x. Not many players will choose Samba Carnival as it's a slot game that's a bit outdated, but they should. It's a quality game with a decent payout of 95.79%. Play'n GO also have many other good slots for mobile and you'll find them all in many of the top mobile casinos. Most of these slot games are worth playing for real money.