It’s safe to say that when you load up Nolimit City slots, you know you are not going to be in for a happy-go-lucky kind-of time. The company takes its dark approach ... Read Full Review 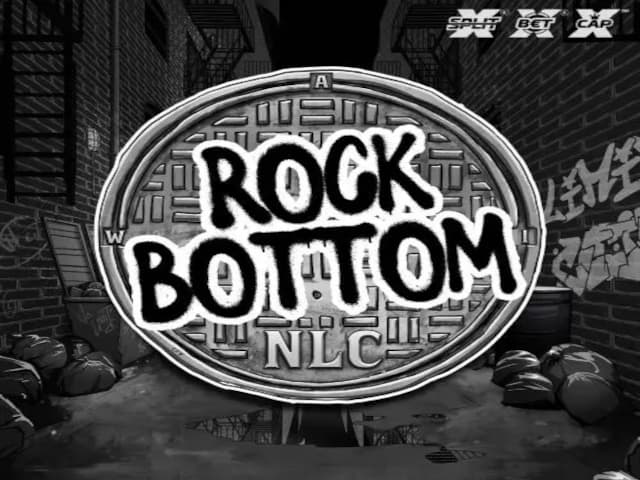 It’s safe to say that when you load up Nolimit City slots, you know you are not going to be in for a happy-go-lucky kind-of time. The company takes its dark approach to slot development one step further with the Rock Bottom slot game. This high-concept slot is about a man who has hit rock bottom and somehow continues to fall. It explores different stages of grief and depression while also hitting players with a wide range of different bonus features and winning potential. Let’s unpack everything that is on offer in this Rock Bottom slot review.

As you might expect from a slot called Rock Bottom, the colour palette here is suitably dark and grimy. The slot is based on five characters, each of which appears to be based on some sort of figure from popular culture that has hit rock bottom. The most obvious of the five are Travis Bickle and The Joker. The latter appears to be quite a big inspiration in general, with the slot’s story about hitting rock bottom bringing back memories of Alan Moore’s iconic Killing Joke graphic novel. The slot uses the same comic-like animation style that has become synonymous with Nolimit City, and it is one of the company’s best-looking titles to date.

How to Play Rock Bottom Slot

Many Nolimit City slots tend to have quite complex set-ups, but Rock Bottom has kept things mostly normal, at least by the company’s usual standards. The game does have a unique reel set-up, with five reels using a 3-4-4-4-3 row count. There are 576 different ways to win on each spin and this is fixed.

Players can adjust their stake value at any time between spins. The minimum wager is $0.20, while the maximum is $150, which gives the game a really nice betting range that should cover most budgets.

Rock Bottom may have a lot going on, but Nolimit City has made sure that all of it fits onto a mobile device. The game has been fully optimised and it provides players with the same gameplay experience whether they are playing it on a smartphone or tablet. It is supported on both Android and iOS operating systems and can be found at a range of top new slot sites.

There are plenty of great bonus features on offer in the Rock Bottom slot game. Firstly, the xSplit symbols, which have become commonplace in Nolimit City real money slots, make an appearance. These can only land on the middle three reels. When these land, they split into two and split any character symbols on the same row into two as well.

In Headshinker Spins, the players get five spins, and these take place on a 3-reel grid. Only characters Scatter, and blank symbols can appear on the grid. The round starts at level 1, with the lowest-paying character symbol acting as a fully stacked symbol. Every five Scatters that players land will put them up one level. Each level has a different character symbol as its Expanding Symbol. These increase in value as you progress to level 5.

Insanity Spins operate in the same way as Headshrinker Spins, only the Expanding Symbols also behave as Wilds. Every Scatter Symbol that lands will also reward players with an additional spin.

Some of the biggest wins in the game are available when players win bigger than 1,969x their bet. When this happens, the xCap: Downfall feature is triggered. This is quite a deceptive name though as the ‘downfalls’ are actually a selection of multipliers that players can choose from that are then applied to their already sizeable win.

In some countries, players may be able to skip the queue and buy their way into the Bonus Round. This might not be available in all locations.

The biggest win on offer in the Rock Bottom slot game is 19,960x the player’s stake. When this is won, players will trigger the Five Stages of Grief end-screen. The slot is highly volatile, like most Nolimit City slots. The RTP for the game is 96.04%, though, there are versions with lower RTPs out there, so be sure to check you have the right one before you hit the spin button.

Rock Bottom may not manage to cram as much in as some other Nolimit City slots, but it is still a top-tier offering from the company. The game falls more in line with some of the studio’s smaller releases like Road Rage. The gameplay is on-point and the slot packs some strong winning potential. The biggest stand-out though is the slot’s unique design and theme. This is definitely a title worth taking for a spin at one of the many top online slot sites that will play host to it. Warning, though, don’t go into this game expecting a happy, cheery gameplay experience.

Who made the Rock Bottom slot game?

The Rock Bottom slot game was designed and developed by the talented minds at Nolimit City. Nolimit City is one of the industry’s most innovative online slot developers and you can find reviews of many of their top slot games here.

Nolimit City has a brilliant selection of online slots for those who enjoy Rock Bottom. The Serial slot and the Mental slot would both be very similar in terms of both gameplay and theme, while games like Road Rage would offer similar mechanics and a more upbeat and fun theme.

Can I buy a bonus in Rock Bottom slot game?

Yes! Players have the option to buy themselves a bonus in the Rock Bottom online slot game. However, this may not be available in all locations.

What is the best bonus in Rock Bottom?

There are several great bonus features in the Rock Bottom slot game. The best will come down to personal preference. There are two Free Spins rounds – Headshrinker Spins and Insanity Spins. There is also the xSplit symbol which is a common feature in Nolimit City slots.

Can I play the Rock Bottom slot game on my mobile?

Of course. The Rock Bottom slot has been developed to ensure that it works on many different platforms and operating systems. The Rock Bottom mobile slot is the same as the desktop version, featuring the same winning potential and bonus features.

When was the Rock Bottom slot released?

The Rock Bottom online slot game was released by Nolimit City on November 22nd, 2022. The slot can be found at a wide range of top online slot sites.

How much I can wager in Rock Bottom?

The Rock Bottom slot game covers a range of different budgets. The lowest that a player can wager in the game is $0.20. The highest amount that can be wagered is $150. This will cover both smaller budgets and higher rollers.

Is there a jackpot in Rock Bottom?

The Rock Bottom online slot game does not have a fixed or progressive jackpot. However, players can win 19,960x their stake, which is the biggest win in the game. Doing so will trigger the Five Stages of Grief end-game sequence.

What is the RTP in the Rock Bottom slot game?

The Rock Bottom slot has a theoretical return to player of 96.04%. This is around average. There are, however, different variants of the slot with lower RTPs. Players can check the RTP of the game in the slot at any time using the information page. The higher the RTP, the better for the player.

Are there any free spins in Rock Bottom?