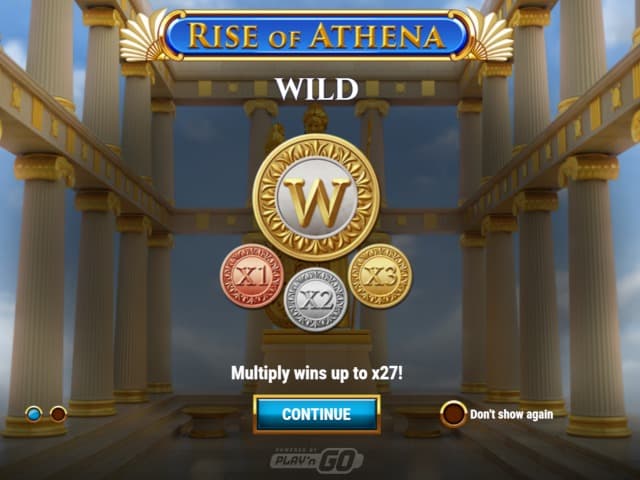 A new Play’n GO slot inspired by ancient mythology, Rise of Athena may go down as one of the studio’s most impressive releases. With an RTP of 96.20% and medium volatility, it’s a fun video slot with plenty of tricks up its sleeve.

Greek mythology slots have always been a great inspiration for the slot industry. Seeing Greek gods and famous heroes on the reels is definitely appealing, especially in visually-impressive slots such as Play’n GO’s Rise of Athena.

The gameplay is not too complicated. The slot has 10 reels, but boasts an impressive return to players, especially if they max out their bets. Play Rise of Athena for real money right now and you can be on the receiving end of rewards worth hundreds of times your stake.

Rise of Athena is your typical Play’n GO online slot. It has 5 reels and 10 paylines, set against a background that depicts an ancient Greek temple dedicated to the slot’s protagonist – the goddess Athena.

It looks pretty great with its crisp-clear and a bit cartoonish graphics. You’ll see symbols that include Athena herself, stylized card royals, a war helmet, an owl, and a wild. The owl is the scatter and one of the higher-paying symbols, delivering 500x your bet for five on a line.

The wilds come with multipliers attached – there are three in total with multipliers going as high as x3. Athena is the game’s highest-paying symbol apart from the scatter, delivering 150x your stake for five of a kind.

The controls of the Rise of Athena slot are pretty straightforward, so you won’t have trouble spinning its reels on desktop and mobile.

Rise of Athena Slot on Mobile

All Play’n GO's online mobile slots work seamlessly across all devices, and Rise of Athena is no exception. Spin it on your Android and iOS mobile or tablet with ease and you can hit the jackpot if you’re got Lady Luck besides you.

How to Play the Rise of Athena Slot

To spin the Rise of Athena online slot, you’ll need to set your bet first. Your options go from 0.10 to 100 coins, suitable for any bankroll size. Hit the green spin button and the reels will turn with a nice animation. Some of the symbols are animated too, making the slot even more visually appealing.

The slot itself offers pretty straightforward action in the base game. You spin the reels and cross your fingers to land wilds and high-paying symbols for great win combos. Keep in mind that the wilds come with a multiplier that can spice up your wins nicely. If you land several wilds with a multiplier, they will multiply each other, with x27 being the highest possible multiplier.

Like most 10-line slots, Rise of Athena by Play’n GO relies on the free spins round to deliver the big wins.

To trigger the free spins, you will need to land three or more scatter owls on the reels. Three, four, and five scatters will deliver a 1x, 20x, and 500x your stake besides handing you 12 free spins. The round begins with one notable different from the base game – all the wilds on the reels are now sticky.

Thanks to this feature, the free spins bonus round can be pretty lucrative. With each spin, the multipliers lose their value until they disappear. This reduces the multiplier by x1 per round, but with 12 free spins on your hands, you have plenty of chances to hit big wins.

The Rise of Athena slots has an average RTP of 96.2%, in line with other Play’n GO slot machines. You can expect varied wins in it thanks to the medium volatility.

When it comes to its maximum winning potential, it’s 5,000x your bet during the free spins round.

If you love ancient mythology slots, you’re going to love Rise of Athena by Play’n GO. It’s a pretty straightforward slot with one special feature that will delight new slot fans. Seasoned spinners can expect a solid return at 5,000x their bets, achievable with multipliers during the bonus round.

Play Rise of Athena for real money right now and enjoy a pantheon of great cash rewards. Visit our recommended online casino slot sites for an idea of where best to play.