Red Tiger is taking us deep into the heart of the jungle with Primate King. You don’t need to be a pop-culture aficionado to see that the slot has drawn inspiration from a certai... Read Full Review 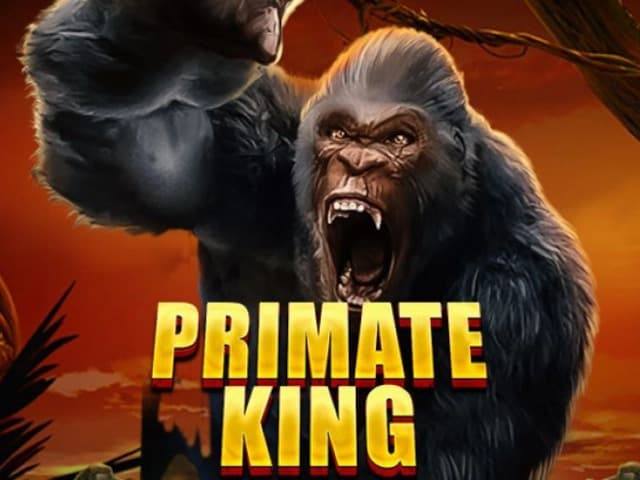 Red Tiger is taking us deep into the heart of the jungle with Primate King. You don’t need to be a pop-culture aficionado to see that the slot has drawn inspiration from a certain king of Skull Island, with Red Tiger doing a good job of reimagining the character for a different medium. Those who are fans of Red Tiger’s progression-based rewards are going to find plenty to enjoy here, with the slot offering a range of wild upgrades and other bonus features. Let’s take a more detailed look at this medium volatile slot in this review and find out what it has to offer.

You can find many slot bonuses in Canada available here on Slotsource.

How to Play Primate King Slot?

There have been many online slots that have decided to run with a King Kong-inspired theme in the past, and Primate King is Red Tiger’s effort. Instead of something cheery and cartoonish like King Kong Cash, though, Primate King has opted to go for a more serious and brooding tone, one which brings back memories of Kong: Skull Island or similar movies.

Like most Red Tiger games, the slot looks slick, boasting some subtle and stylish animations and an easy-to-use interface. Getting started is easy enough – players just need to click on the stake button in the bottom left-hand corner. This will open a range of options, with $0.20 being the lowest you can wager and $20 being the maximum. This isn’t a particularly high range and is likely to suit those on smaller budgets.

Primate King is very easy to play. The fun takes place across a 5x4 set-up, though a sixth reel can become active later in the game. There are 30 different paylines active for each spin.

All the other information you might need regarding the game is easy to find. There is a help button in the bottom corner, which will provide you with info on how to play, and the paytable can be accessed using a menu in the top corner.

You will find all of the info about the symbols here. Outside of the wild feature that is the most useful symbol in the game, the highest paying is a box of treasures. The rest of the symbols are made up of miscellaneous items that could be found from the King’s lair.

Primate King may be based in the jungle, but there is nothing primitive about this title. The slot works just as well on mobile devices and is supported on both Android and iOS operating systems. The touch version of the game runs in exactly the same way as the desktop version, and players are not likely to notice any issues in the transition.

Red Tiger is extremely fond of progression-based achievements, and Primate King is no different. To the right-hand side of the screen, players will see a metre with three levels. During spins, symbols will show up with gold coins attached – these coins will then be added to the metre. Once you have collected 30 coins, you will unlock the first upgrade – which turns the standard Wild symbol into an expanding wild covering 1x4 on the reels.

A further 30 coins will unlock the second upgrade, which sees a random multiplier added to the Wilds. Finally, once you hit 90 coins and fill the metre, the Wild will then become sticky, and the multiplier will increase. The Wild symbol will stick on the reels after a non-winning spin and stay there until you manage to land a win. Needless to say, this is an effective system for getting you to stick around and keep playing.

Once you have managed to unlock all three of the Wild upgrades, they will remain in place for the rest of the game. The bonus metre will then convert into a sixth reel on the slot, increasing your chances of a big win.

The slot also wants to keep you engaged when you aren’t winning or adding to the metre. The game has the Primate Smash feature, which can be triggered at random after a Wild lands as part of a non-winning combination. When this happens, the Primate King himself will come and remove all low-paying symbols and fill your reels with higher-paying ones until you secure a win.

While there is no jackpot available in Primate King, there is still the chance to score some big wins thanks to the multiplier system and the three bonuses. Once all of the six reels have been activated and the bonus is in play, players are able to score a nice 3,800x their stake win.

Your thoughts on progression-based features are going to determine how much mileage you get out of Primate King. If you are looking for a slot that offers easy to access bonuses and a free spins round, then you may want to look elsewhere. If you don’t mind persevering to unlock features and be rewarded in the long run, then give Primate King a spin for real money at our recommended slot sites. The Wild features here, once unlocked, can really help boost your winnings, getting to them just takes some time.

Outside of the features, there is still plenty to enjoy here. The gameplay is simple but effective, and the graphics are good. The high volatility will no doubt turn away a few players, though, as will the lack of higher wagering options.

How often can I win on Primate King slot?

Primate King is a medium volatility title, so don’t expect wins to come along very often. That said, when you are lucky enough to secure a win, it should be a fairly substantial one.

What is the RTP of Primate King slot?

The RTP of Primate King is 95.66%. This is a fairly average RTP for a game. Players should expect to see some returns from their play.

No. The Primate King slot is not a Megaways title. Red Tiger Gaming, however, has produced several Megaways titles over the years, and you can find reviews of several of them in our slot reviews section elsewhere on the site.

Can I play Primate King slot on my mobile?

Yes. Primate King online slot has been fully optimised to work on a range of different mobile devices. The slot will run on both Android and iOS operating systems and will also run on any mobile casino applications that it is on.

Is there a jackpot available in Primate King slot?

No. Primate King online slot doesn’t have a fixed or progressive jackpot available for players to win. That said, the maximum amount that can be won from the slot is 4,8000x your stake, which is fairly significant.

Are there any other similar slots to Primate King?

From a thematic perspective, there are plenty of games that share the same theme as the Primate King slot. King Kong Cash is a really fun take on the same character, though it is much more cartoonish and friendly. From a gameplay perspective, several Red Tiger titles, including Pirates’ Plenty, have progression-based features.

Is there a free spins round available in Primate King slot?

Sadly not. Primate King online slot machine puts all of its emphasis on its wild features, with the three upgrades being the only bonus features available in the game.

Where is the best casino to play Primate King slot?

Many great casinos feature games from Red Tiger, so it is a matter of choosing which is the best for your needs. You can find a great selection of the best casinos in our review section.

What is the minimum wager on primate King slot?

Primate King slot has a very small wagering range. The minimum that can be wagered in one spin is just $0.20, while the maximum is $20. This is a low wagering range that will suit players operating on smaller budgets.

Can I Play Primate King slot for free?

Yes, you are likely to be able to play on a free version of the Primate King slot game at online casinos.