Pied Piper is a 5x4 Quickspin slot with 40 fixed paylines, and it features stacked walking Wilds and a free spins game. Even with many Wilds on the board the game doesn't pay that ... Read Full Review 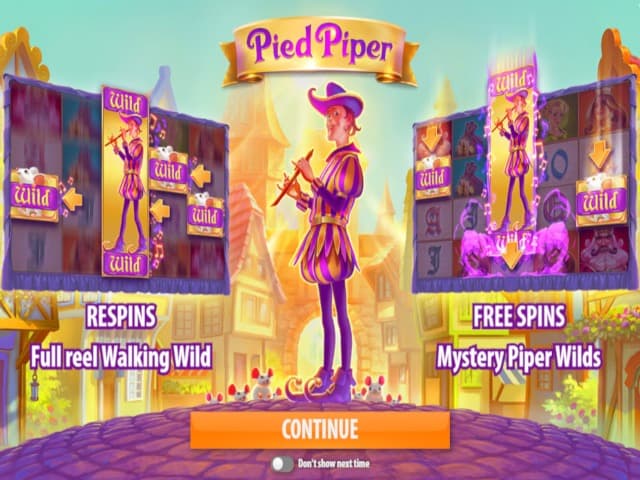 Pied Piper is a 5x4 Quickspin slot with 40 fixed paylines, and it features stacked walking Wilds and a free spins game. Even with many Wilds on the board the game doesn't pay that often, though the animations are beautiful. The game is based on a bedtime story of Pied Piper who saved the city of Hamelin from rats, but then the city refused to pay so Piper led all the children out of the city as well.

The game uses 40 fixed paylines on a 5x4 board, so the only choice you need to make is how much do you want to bet per spin. Bets from 0.20 to 100.00 are allowed. Also, the game is a bit slow if you use the normal Spin button, and it doesn't pay often either, so you may want to click Fast Play or Autoplay to speed things up. On the left you can check out game rules and the paytable, and see that the theoretical return to player (RTP) is healthy 96.32%.

The Pied Piper Wild is four rows high and is the main symbol in the game, and also the most beautiful. It appears on reels 3, 4 and 5 only. Whenever it lands fully stacked on the reel, it will trigger the Piper Respins feature. On each re-spin, the Piper, as well as any Mouse Wilds, will walk one reel to the left until the Piper leaves the board. But even when he does, there's a chance of a mystery re-trigger of the feature, with another Piper appearing on the rightmost reel to award 5 new re-spins.

Three Bonus Scatters need to land on your board on the same spin in order to trigger the free spins game. Scatters only appear on the middle three reels. On each free spin, 1 to 6 Mouse Wild symbols are guaranteed to be randomly added to your reels, and a mystery Piper Wild symbol can also appear after any free spin, initiating the Piper Respins feature.

However, despite the seemingly huge benefit from those walking Wilds in the main game, the added Mouse Wilds in the free spins game, and the chance to land a mystery Piper Wild anytime, these features don't necessarily amount to much. We could say that the game pays on a decent level only because of those Wilds, and it takes a lot of luck to actually land a big win.

The paytable consists of ten normal symbols, and five of them are low-value card symbols that can give you your stake back at best. Of the five main symbols, only the King can pay well, as the prize is 10x your bet when you land five-of-a-kind.

Graphics are just stunning, and two highlights are the animations when you're waiting for the third Scatter and when there's a chance to land a mystery Piper Wild. Anyone who enjoys fairytale slots will be thrilled with this theme, even if the game can look a bit dull when nothing is going on, and that's most of the time as win frequency is low in this game.

Pied Piper slot is one of those slots that disappoint you a bit with the frequency and quality of wins, as you usually expect big wins when you see that many Wilds on your board. Not in this slot game, as even 5 or 6 Wilds won't be enough to guarantee a decent win. That makes this slot a bit difficult to play, and despite the solid theoretical payout this game feels as if it can't pay well. Variance is high and a lot of things need to align in Pied Piper in order to land that big win. There are other Quickspin slots, notably Northern Sky or Big Bad Wolf, to consider if Pied Piper is not your cup of tea. In any case, you'll find all these slots at all the best online casinos.