Mystery Joker 6000 is a modern three-reel slot machine released by Play'n GO in late 2017, and it features two levels of play, paytable prizes up to 20x your bet, and a Mystery Whe... Read Full Review 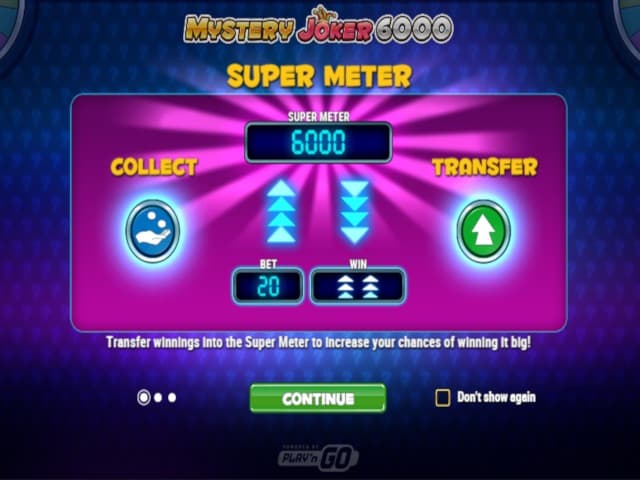 Mystery Joker 6000 is a modern three-reel slot machine released by Play'n GO in late 2017, and it features two levels of play, paytable prizes up to 20x your bet, and a Mystery Wheel with prizes up to 600x your bet per spin! The maximum number of spins you can get in one go is three.

Play'n GO don't usually use coins in their slot games, but this one does as it's expected for a three-reel slot machine to be using coins. Bets are fixed at 10 coins per spin – or 20 in the Super Meter game – and you can adjust your coin value with a selector on the left, and that's how you get your total bet which can range from 0.10 to 100.00, or 0.02 to 20.00 per payline as the 5 paylines are fixed. Other than that you can choose to use Fast Play or Autoplay, and whenever you win the Spin button will turn into the Transfer button, while the smaller blue Collect button is on the left.

Joker symbol is the Scatter that plays a key role in this game, and there are no Wilds. You're supposed to land three Jokers to spin the Mystery Wheel and to then have the option of taking the winnings to the second stage of the game, called Super Meter, where the prizes are better.

The game is played on a 3x3 board with 5 paylines and it has really good graphics, perhaps among the best of all similar three-reel slots, and the theoretical return to player (RTP) is 96.97%, which is pretty good. Variance seems to be low, yet in this game you can win up to 6000 coins per Mystery Wheel spin, which is 600x your total bet!

Other than the Joker, there are seven more symbols in the game. Prizes range from 20 to 200 coins, so as the bet is fixed at 10 coins that means the prizes are from 2x to 20x your total bet. Sevens, Stars and Bells are the three best symbols and they pay 20x, 12x and 10x your bet respectively. In fact, only Cherries and Lemons are worthless, and all other symbols are alright.

It is advised to always Transfer the coins to the Super Meter game, as that's where the big prizes are, and if you'd Collect all the time, you'd reduce your theoretical payout from this slot machine significantly. Jokers are the most important thing in the game, especially when you're in the main game and need to land three Jokers to even get this game started properly.

Mystery Joker 6000 is a decent three-reel slot machine that has two levels, and the second level offers pretty good prizes and, crucially, an easier way to get to them. While three Jokers in the main game will only give you one spin on the Mystery Wheel, three Super Jokers on the second level will give you 3 spins, and two will be enough to give you 1 spin. This is a good simple game for fans of this type of slot machine, so you'd be advised to find a good Play'n GO casino and play this game for real money if you play three-reel slots, because this is a very good one and prizes can be ultra rewarding.