Developed by iSoftBet, Merlin’s Revenge Megaways is a magic-infused spinner with loads of charm. As its name suggests, the title character here is everyone’s favourite mythical wizard, who is also the prime ... Read Full Review 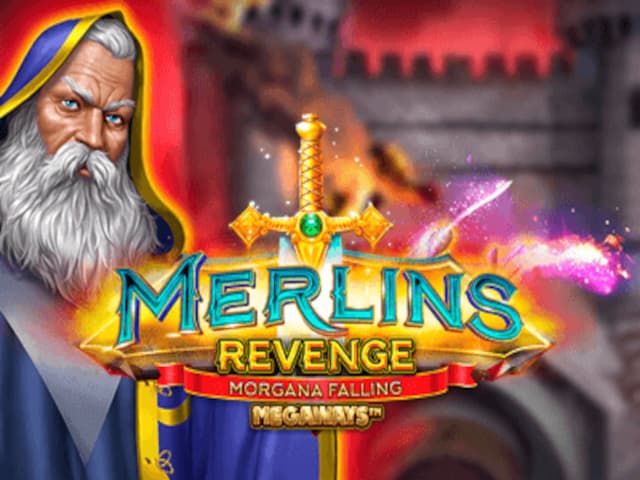 Developed by iSoftBet, Merlin’s Revenge Megaways is a magic-infused spinner with loads of charm. As its name suggests, the title character here is everyone’s favourite mythical wizard, who is also the prime motif of thirty other reel-spinners.

Merlin’s Revenge Megaways is a medium to high volatility game that implements the Cascading Mechanic pioneered by Gonzo’s Quest. The hit frequency here is 29.9, and the RTP setting is the industry average of 96%. iSoftBet has decided to set the max win potential of this Megaways title at 28,988x on a max wager of $20.

Part of iSoftBet's Twisted Tales series, this reel-spinner is somewhat of a clone of Morgana Megaways. Nevertheless, it stands on its own and is a nail-biting gaming experience as we have played in recent times. Its top real money prize potential is not shabby and should serve as incentive enough for you to try it, with or without a slot bonus.

Layout-wise, iSoftBet has opted to feature a 6x7 grid here, with the reels set against a creepy-looking forest where a stone cabin lurks in the background. We presume that Merlin resides there.

The low-paying symbols of this iSoftBet product are the standard A-9 card royals in different colours, delivering wins of 0.5x to 1x for six-of-a-kind. While the premium ones are three gems and Merlin, supplying rewards of 1.5x to 10x for six matching tokens from this batch appearing in the dark forest.

A Mystery Symbol, a Wild, and a Scatter also appear on the reel grid during regular and Free Spins gameplay.

In all honesty, this game looks a bit dated, boasting a mid-2010 feel to it. However, the unspectacular graphics get accompanied by a decent soundtrack and some excellent audio effects that should immerse anyone in this Arthurian reel-spinning adventure.

You can play the Merlin’s Revenge Megaways slot on all iOS and Android devices with zero trouble. It got developed using HTML5, making it suitable for tablet and smartphone play at the best Android casinos and iPhone slot sites.

In order to discover if Lady Luck is on your side on Merlin’s Revenge Megaways, you must set a wager size before pressing spin. The default one is the low amount of $0.2, but you can adjust it so that it goes up to $20. You’ll find the Spin button above the bet-adjuster option on the right side of your screen.

Since this slot has the word Megaways in its title, that means that it incorporates Big Time Gaming’s award-winning innovative random reel modifier system. That means the number of symbols per reel will change with every spin. Merlin’s Revenge Megaways also further spices things up by adding the cascading mechanic, which causes game tokens that are a part of winning combos to explode, allowing new ones to fall into their place.

The Merlin’s Revenge Megaways slot has multiple bonus features. They are:

Merlin’s Revenge Megaways has a Bonus Buy option that lets you buy your way into the Free Spins Round for a price of 80x.

The Merlin’s Revenge Megaways slot has an RTP of 96.5%. That is above average, particularly for a game with a medium to high volatility that can pay out a top prize of $579,760.

Will Merlin’s Revenge Megaways become the next big iSoftBet slot? That’s up to the online gambling community to decide. We believe it is a worthy addition to the Twisted Tales franchise, seeing it as an adequate follow-up to the refreshing Morgana Megaways.

The Megaways and cascading mechanics always work nicely together. And given that they have gotten paired with a high RTP and medium volatility here, this game is a proposition that no casual slot gambler should pass up at top online slot sites.

The Merlin’s Revenge Megaways slot got developed by iSoftBet. That is an interactive gaming content supplier that delivers web and mobile products to operators who run gambling websites in twenty regulated markets. iSoftBet works with brands like IGT and PokerStars.

The Merlin’s Revenge Megaways slot RTP has gotten set at 96%. That is the sector average, and it represents a pretty decent return of investment for a medium to high volatility game, particularly one that has a max exposure setting of 28,988x.

What slots are similar to the Merlin’s Revenge Megaways slot?

At the time of writing, going by our count, there were thirty-one Merlin-themed reel-spinners on the Web. The highest-ranked ones by players are Rise of Merlin from Play’n GO, Book of Merlin from 1X2 Gaming, and Iron Dog’s Crown of Avalon.

How many paylines does the Merlin’s Revenge Megaways have?

Merlin’s Revenge Megaways uses Big Time Gaming’s Megaways engine, a gameplay system that produces a different number of symbols on every spin. The most betways possible in this game are 117,649, which is loads, opening the door for frequent wins.

Can I play the Merlin’s Revenge Megaways slot on mobile?

Yes, of course. iSoftBet, like all modern online slot developers today, has made the switch to HTML5 technology, so all their products are smartphone and tablet compatible. Hence, you should encounter no issues playing this or any other iSoftBet slot on the go.

Why is the Merlin’s Revenge Megaways slot popular?

It is a part of iSoftBet’s Twisted Tale collection, a series of highly dynamic games that many players adore. iSoftBet started releasing Twisted Tale slots in 2020, and some of their more popular releases from this franchise are Moriarty Megaways and the Sheriff of Nottingham.

Are there any Merlin’s Revenge Megaways slot promo codes?

When we wrote our Merlin’s Revenge Megaways slot review, no promo codes for this reel-spinner were up on our site. That said, it is wise to keep checking back now and again. Maybe some have made their way onto our platform.

How do you win on the Merlin’s Revenge Megaways slot?

You earn prizes on Merlin’s Revenge Megaways by forming matching symbol combinations of at least three identical tokens. Thanks to the Megaways engine, the number of available betways in this game can expand up to 117,649, boosting the win frequency.

What is the maximum payout in the Merlin’s Revenge Megaways slot?

The Merlin’s Revenge Megaways slot can produce a max win of $579,760. That can only happen if you wager the max stake amount of $20. Note that for a medium to high volatility game, we can say that this is an adequate max win potential.

What is Merlin’s Magic in the Merlin’s Revenge Megaways slot?

It is a feature that triggers randomly on non-winning spins only. When it activates, it either provides you entry into a bonus round or changes the outcome of your losing spin into a winning one. The latter is more likely.