If you were one of the millions of viewers who used to quote the likes of Vicky Pollard and Marjorie Dawes ad nauseam, then the Little Britain online slot will tickle your ... Read Full Review 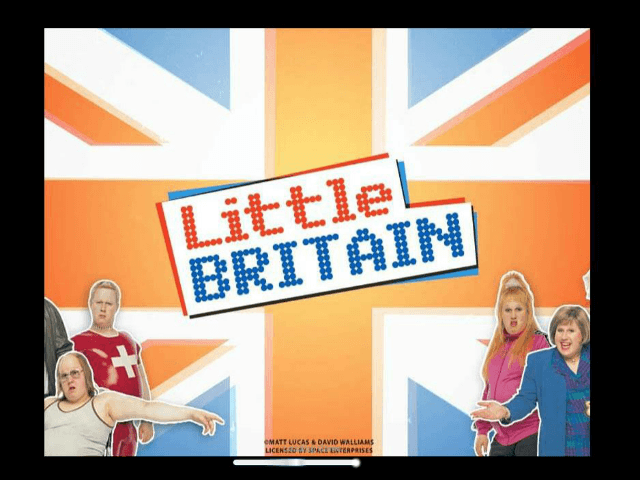 If you were one of the millions of viewers who used to quote the likes of Vicky Pollard and Marjorie Dawes ad nauseam, then the Little Britain online slot will tickle your fancy no end. Loaded with near-the-knuckle humour and a huge array of bonus features, this five-reel, 30-payline game of guffaws is a veritable one-stop-shop of catchphrase-based play. But is it any good? Let’s see what the computer says...

Ash Gaming has clearly pulled out all the stops to ensure the Little Britain slot machine remains faithful to the hugely popular comedy series created by Matt Lucas and David Walliams. Certainly, the instantly recognisable characters on the reels and the striking Union Jack backdrop hit you like a well-aimed one-liner. The cheeky animated intro is definitely the standout feature though, with its booming narration by Doctor Who himself, the legendary Tom Baker.

While playing cards represent Little Britain’s low-value motifs, five of the show’s most popular characters make up the higher-value symbols. This means it’s Emily Howard, Marjorie Dawes, gay Dafydd, Vicky Pollard, and Lou and his wheelchair-‘bound’ friend Andy that you need to keep your eyes peeled for. There’s also a LB free spins flag logo, a bonus symbol and a Little Britain wild card. The bonus games within Little Britain are as numerous as the characters in the show. These include:

Land the Free Spins symbol on reels two, three and four and you’ll receive ten free spins. Stacked characters become active during this feature so you can expect an extra reward if one of them covers the entire reel. You’re also privy to any prizes it creates as part of a winning combo.

Psychiatric patient Anne has her own bonus which pops up, as you might expect, somewhat randomly. This entails her shuffling onto the screen and throwing wilds at a selection of symbols relevant to the previous spin.

Get three bonus symbols on reels one, three and five you’ll enter the Little Britain slot’s main bonus feature. This essentially involves spinning a wheel then taking part in one of the five following character-related bonus games:

Fans of the show will no doubt love the Little Britain online slot game. But with so many bonus features on hand from 30p to £300 per spin, this fun and engaging title is likely to appeal to non-fans just as much. And if you're a fan of other British television shows, make sure to check out the Britain's Got Talent and Monty Phyton slot games too!

Top 10 Slots Based on TV Shows