Illuminous is a futuristic gem-themed game by Quickspin that features Hot Reel Respins and Hot Reel Free Spins where you'll get some more Wilds on the reels, and will have a chance ... Read Full Review 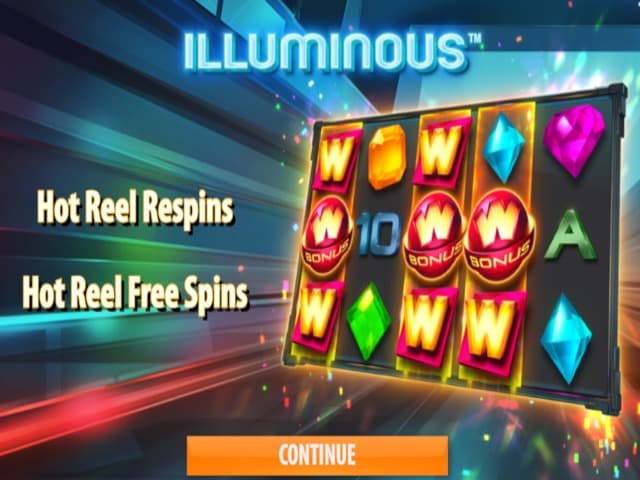 Illuminous is a futuristic gem-themed game by Quickspin that features Hot Reel Respins and Hot Reel Free Spins where you'll get some more Wilds on the reels, and will have a chance of landing a big win. The game is simple to play and it relies heavily on help of Wilds to generate wins.

The game is played on a 5x3 board and it uses 20 fixed paylines, and the minimum allowed bet is 0.40, which means you have to pay at least 0.02 per payline, which may put some people off. Also, there are only ten bet levels so there's not much freedom there. After you've chosen your bet per spin, simply click Spin or use the Autoplay buttons if you want to speed things up. This game doesn't have a Fast Play button which is normally present in all Quickspin games. Game rules are available if you click the ladder icon on the left, but the game is simple so it's best just to click Spin.

There are six card symbols in this game, which is plenty, and they can only pay 1x or 2x your bet at best. Furthermore, of the four medium win symbols two are not that good as they pay only 1.50x for four-of-a-kind and 3.75x for five-of-a-kind, and the only symbol that stands out is the Purple Diamond, that pays a 12.50x prize when you land five of them on a winning payline. Wild pays the same, and so does the Bonus Scatter, so you got three symbols that can pay a good prize, though Purple Diamond is the only one that can also be involved in a multi-payline win.

Bonus Wild Scatter symbol is an interesting one as it acts as both a Wild and a Scatter, so it substitutes for all symbols as well as being responsible for triggering not only the free spins game but also the re-spins. When you land three or more Scatters on a single spin, you'll enter the Hot Reel Free Spins, and if you land two Scatters you'll get a Hot Reel Respin. The two triggering reels will have additional Wilds, and if you happen to land another Scatter you'll get another re-spin.

When you land three or more Scatters you'll get 5 free spins and they'll also have the Hot Reel Effect so the three triggering reels will have more Wilds throughout the duration of the feature. If you land another Scatter during the free spins game, you'll get a Hot Reel Respin.

The game doesn't pay often during the main game, so it's one of those slots that need the bonus feature in order to loosen up and start paying. The higher chance of Wilds during the Hot Reel Respin and especially the Hot Reel Free Spins will have a serious effect, however, as not only the chance of Wilds will increase but you will actually get them. This will finally open up the game and make it pay multiple winning paylines, but chances are, your balance will already be negative and you'll need those bonus features to get back on track.

Illuminous obviously competes with NetEnt's Starburst as it's basically the same visual theme, and it has a slightly better theoretical payout, 96.50% compared to Starburst's 96.10%, but Illuminous doesn't have low variance as Quickspin don't do low variance. If you're a Starburst fan and need something different, try out Illuminous, it's a decent slot game that looks like Starburst but plays very differently. Visit one of our recommended Quickspin casinos and find the game there.