Fu Er Dai is a classic slot by Play'n GO that has a powerful paytable and a powerful free spins feature with guaranteed win on every spin, sticky Wilds, and extra free spins up to ... Read Full Review 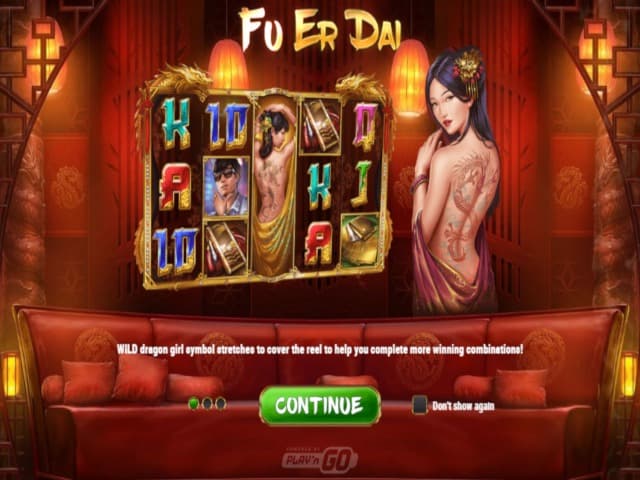 Fu Er Dai is a classic slot by Play'n GO that has a powerful paytable and a powerful free spins feature with guaranteed win on every spin, sticky Wilds, and extra free spins up to a total of 20. This is a high variance slot game with rich prizes.

This game uses coins, but the number of paylines is fixed at 10, so you can only choose your coin value and the number of coins per spin, from 1 to 5. Bet per spin can range from 0.10 to 100.00, so you've got a good range to work with. This is a high variance slot with a low win frequency, so don't choose too high of a bet as you need to be able to play many spins. After you've chosen your bet, simply click the Spin button or the Autoplay button if you want to play faster.

Fu Er Dai is essentially a classic 5x3 slot with 10 fixed paylines, and most of the symbols you'll see on your board are card symbols, five of them that pay from 50 to 150 coins for five-of-a-kind, which is actually 5x to 15x your total bet. The card symbols also pay well for four-of-a-kind, 1x to 2.5x, and three-of-a-kind wins only get you a fraction of your stake back.

The important symbols are more rare but can give really good prizes, up to 150x your bet on a single winning payline, which is excellent. Prizes for five-of-a-kind range from 25x to 150x in this group of five symbols, so Fu Er Dai is a true high variance slot with a powerful paytable.

Whenever a Dragon Wild symbol lands on your reels – which is rare – it will expand to fill the entire reel, transforming into a Geisha Wild symbol. When this happens, you'll at least get a re-spin with a Sticky Geisha Wild, and the goal is to land at least two Geishas on your reels, as that's what triggers the free spins game. Geishas only appear on the middle three reels, and if you land two or three you'll win 5 free spins called Win Spins because a win is guaranteed on each spin.

Each Wild that lands during Win Spins is sticky for the next spin. Every Wild can be sticky for up to three spins if new Wilds land on the following spins. Also, each Wild that lands during the feature will give you an additional Win Spin, and you can get up to 20, each with a guaranteed win. Wilds seem to be much more common during the free spins game than they are during the main game, so it's during this feature that you'll actually be making money from that generous paytable.

The game has excellent graphics, and the usual golden/Chinese theme is highlighted with Geishas, so this is a unique theme that's different than the other similar ones. Classic slot players will enjoy it the most, and it only has a small problem of card symbols being too visible. But, at least they can pay decent prizes so you won't hate them too much.

Theoretical return to player (RTP) of Fu Er Dai is 96.50%, which is decent, and classic slot players would be advised to play this slot game instead of some older classic slot with a poor payout. Prizes can really be great in this game, and the maximum win on a single spin is 1500x your bet, which would be the prize for landing a full board win of the same symbol. But, crucially, the game also offers numerous medium wins, from 25x to 150x, on a single winning payline. That's why it's worth to play Fu Er Dai for real money, and you should do so in one of our recommended Play'n GO casinos.