Fisticuffs slot is a nostalgic look back at the world of boxing in the early 1900s. The game's software provider, NetEnt, has created a rollicking game over five reels and ten paylines ... Read Full Review 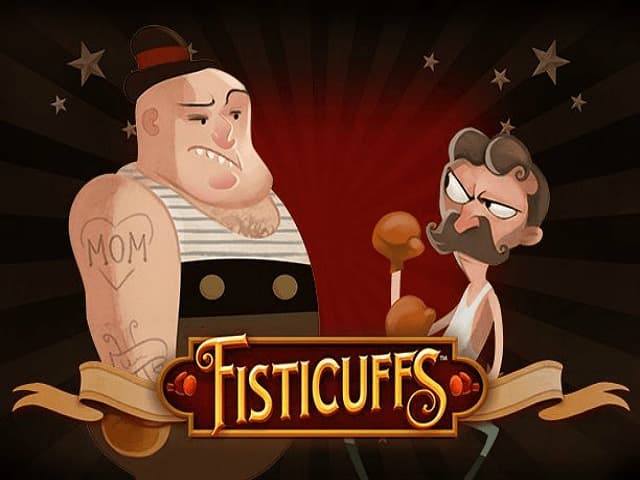 Fisticuffs slot is a nostalgic look back at the world of boxing in the early 1900s. The game's software provider, NetEnt, has created a rollicking game over five reels and ten paylines where the characters on the reel engage in a spot of sparring. Read through our Fisticuffs slot review to find out why you should strap on those old boxing gloves and jump into the ring.

Fisticuffs online video slot harkens back to the day when boxing matches were fought in local halls, and not in epic amphitheatres. You can hear people politely talking in the background in between spins. When the board is in play, a simple music hall piano track plays, with the crowd jeering if you strike a winning payline. Casino software provider NetEnt has managed to perfectly capture the turn-of-the-century era with its hand drawn caricatures and iconography. There is a smashing return-to-player (RTP) rate of 96.7%. The highest payline is 500 times the original bet, but combining this with bonuses could see you win 100,000 coins.

The world of Fisticuffs perfectly encapsulates early days of boxing, and the beautifully drawn symbols only serve to enrich that world. The reels are filled with iconic imagery like laced boxing boots, corner stools, and the bell that dings to mark the beginning and end of each round. Higher paying symbols include a pair of early boxing gloves, a boxing trophy, and a gold-star encrusted winners championship belt. The gloves pay out 150 times the initial bet if you land five of them, while the trophy offers 250 times the bet. However, the belt is the one to aim for, paying out 500 times the initial wager if you happen to spin a full payline of them.

One of the special features offered in the game is the Boxing Feature, which requires two different wild symbols to appear next to one another, either horizontally or diagonally. Once they do, they will engage in a boxing match, and create more wilds as a result of their fisticuffs. The Straight Wild is the larger of the two boxers with a comically tiny hat resting on his meaty head. He only appears on the central reel, while his opponent can emerge on either side of him on reels two or four. If the spryly second boxer has the misfortune of appearing directly opposite him, the Straight Wild will punch him to the far reels. The smaller boxer will be sent flying across the board, turning all the symbols in between into normal Wilds.

The smaller, moustached Diagonal Wild boxer can pop up on either reel two or four. If he is positioned diagonally above or below his rival boxer, he will connect a mean right hook that will send him flying. This will convert the icons above or below into wilds, depending on which directing the Diagonal Wild boxer punches. These wilds will remain in place for one re-spin, during which they can be stacked on reels one and five.