Fire Strike was a Pragmatic Play slot that took the industry by storm. It impressed players with its winning potential mostly due to the Scatter Jackpots that paid a whopping 5,000x for ... Read Full Review 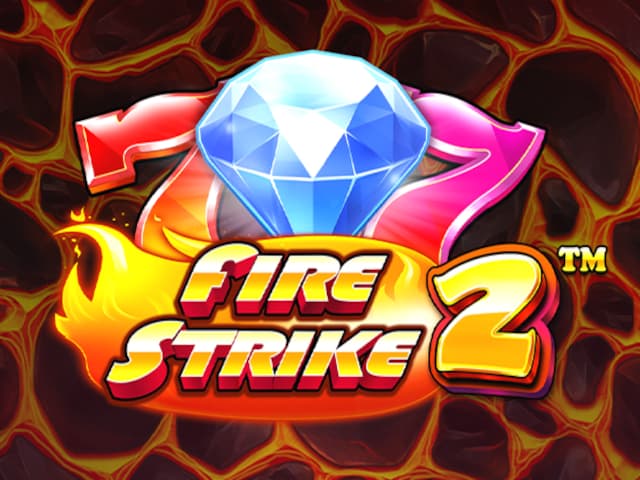 Fire Strike was a Pragmatic Play slot that took the industry by storm. It impressed players with its winning potential mostly due to the Scatter Jackpots that paid a whopping 5,000x for 15 on the reels. The slot’s popularity pushed the studio to release a sequel simply titled Fire Strike 2, this time with improved specs and much bolder and more rewarding gameplay.

Fire Strike 2 is a medium volatile sequel to the original. It has built upon all of its aspects, retaining the best specs and features. The Fire Strike 2 slot offers an RTP of 96.53% and has the same number of paylines – 10, and even though the winning potential is a bit lower, the hit rate is better this time.

It’s a fiery explosion of Wilds and special symbols that can pay up to 25,000x the stake. Try the demo right now or play the slot for real money at the best online casinos and those Scatter Jackpots could be yours.

The Fire Strike 2 slot isn’t hard to play. It has a standard 5x3 setup with retro symbols on the reels. Animated flames and hot lava are in the background and around some of the symbols, perfectly suitable for the theme and the slot’s name. It’s all an impressive retro setup both visually and in audio terms, with cool disco tunes in the background that will put you in the right mood.

The flaming red-hot seven is the highest-paying premium, delivering wins of 100x for five on a line. There’s a pink and blue seven too, paying 50x and 30x respectively for the same combination. Single, double, and triple BARs follow them, with bells, stacks of cash, and poker chips representing the other symbols. The lowest-paying combo is a combination of any three sevens, effectively replacing card royals. Aside from the premiums, the top-paying symbol is the Wild, delivering 200x wins for five of a kind.

Pragmatic Play has done a great visual job with the slot, giving it a spot-on retro look and feel which we loved.

You can play the Fire Strike 2 slot on any mobile device, be it an Android or iOS smartphone or tablet. No need to download anything to spin it. Head to your favourite Pragmatic play Android casino or iPhone slot site and enjoy the slot from a browser.

How to Play the Fire Strike 2 Slot

Adjust the wager to what you feel comfortable with, then hit the Spin button to start playing. You should cross your fingers for premiums and Wilds, with the latter paying on their own and stepping in to complete winning combinations. The main highlight, though, is the Scatter Jackpots.

You’ll see a paytable for their payouts stacked on top of the reels. If you ever played a similar slot, you know how they work. You get paid for landing 6-15 Scatters, with each combination paying according to the paytable. On a default wager of $1 per spin, the maximum payout for filling the screen with Scatters is 5,000x.

There are no other special features in the base game, but there is a Free Spins Round.

The Fire Strike 2 RTP is positioned greatly at 96.53% for a medium volatility slot. As mentioned earlier, the top payout is 25,000x the stake – that’s the jackpot you can hit with 15 Fire Strike 2 Wilds.

Fire Strike 2 is a great sequel to the original Pragmatic Play hit. It reintroduces some of the best features while bumping up the hit rate and winning potential. You can hit a fantastic Scatter Jackpot at any point in the game, making it an appealing follow-up to fans of the studio or the original game.

Who developed the Fire Strike 2 slot?

The Fire Strike 2 slot was developed by one of the biggest studios in the industry – Pragmatic Play. It’s the studio that brought us the original Fire Strike slot as well as many other hits including Big Bass Bonanza, Wolf Gold, Wild Wild Riches, and Chilli Heat.

No, it isn’t. The volatility has been dropped from medium/high to medium only. It works in perfect synergy with the 96.53% RTP and has a decent hit rate. With a bit of luck and 15 Scatters on the screen, this is a slot that can be pretty rewarding.

Can I play the Fire Strike 2 slot for fun?

Yes, you can. The slot demo should be available for fun in any Pragmatic Play casino, sometimes even without creating a new account.

Is there a jackpot to hit in the Fire Strike 2 online slot?

Is the Fire Strike 2 slot available on mobile devices?

Of course, it is. Pragmatic Play is a mobile-first developer, producing its slots on the HTML5 platform. You can play the slot from a mobile browser on any Android or iOS device, including older and the latest smartphones and tablets.

Do I need a mobile app to play Fire Strike 2 on the go?

No, you don’t. You can play the slot from a mobile browser on any mobile platform without downloading an app. Just head to your favourite Pragmatic Play casino, log in with your credentials and spin the slot on the go from a browser.

What’s the best casino to play the Fire Strike 2 slot?

We can’t tell you that – it’s up to you to decide. There are plenty of Pragmatic Play casinos available on the market, and you need to choose the best one yourself. Take a look at them all, find one that suits your wants and needs, and enjoy the slot anytime and anywhere.

Is there a promo code to redeem on the Fire Strike 2 slot?

There’s no promo code we can currently share with you for the Fire Strike 2 slot. There might be one to use in the future, though, so make sure to check our website regularly. Whenever there’s a code you can use, you’ll find it on the front page.

Which slots are similar to Fire Strike 2?

The original Fire Strike slot closely resembles the sequel. If you’re looking for other scatter jackpots, we can recommend 9 Blazing Diamonds by SpinPlay or 9 Masks of Fire and 9 Pots of Gold, collaborations between Gameburger Studios and Microgaming.

When was the Fire Strike 2 slot released?