Spartan warriors were apparently so mighty that they’re now the stuff of legends. A particular legend of 300 Spartans defending their ground to the death has made it to comics and slot ... Read Full Review 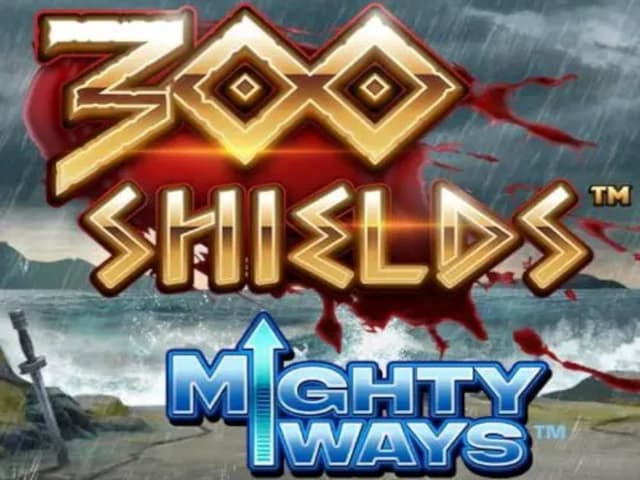 Spartan warriors were apparently so mighty that they’re now the stuff of legends. A particular legend of 300 Spartans defending their ground to the death has made it to comics and slot games alike. NextGen was the first to adapt that story in a pair of slots, and a new release in the series called 300 Shields Mighty Ways now comes from Light & Wonder.

It’s another highly volatile instalment that retells the legend of the mighty Spartans. It has 729 ways to win initially, paired with a volatile math model and an RTP of 95.99%. The slot uses the Mighty Ways mechanic that adds new positions to each Cascading win, essentially boosting the number of ways to win.

In the Bonus Round, you can expect multipliers up to x300 with other surprises in tow. The 300 Shields Mighty Ways is a mightily good slot game, now available for free and real money in any Light & Wonder online slot site.

300 Shields Mighty Ways has a 6x3 layout set against a beautiful background showing ancient Sparta. The slot isn’t hard to play considering all of the controls are in their usual spots. It’s a pretty clean interface that makes it easy to spin the slot game across all kinds of devices.

Not surprisingly, the reels are populated by warlike symbols, starting with Spartan warrior helmets. A flurry of spears coming your way can also be seen, as well as nicely designed card royals that fit with the theme. The Archer is the highest-paying premium, delivering wins of 10x if you hit the bullseye of six. A raging Spartan Warrior is the game’s Wild, while a Spartan Shield is the Scatter.

Visually, the slot is as impressive as it gets, and the audio is epic. It’s a nice combo that will immerse you right into the Spartan battlefield. We especially liked the slashing bloody effects that slice up each winning symbol in half. Brutal.

As a slot developed on the HTML5 platform, 300 Shields Mighty Ways can be played on any Android and iOS device. Just open it from your browser and enjoy the action without downloading slots apps.

To enter the battlefield, you need to place a bet from $0.20 to $20 per spin. Hit the aptly placed Spin button on the right or use the Autoplay feature to turn the reels automatically. As mentioned, the game starts with 729 ways to win, so get ready – it’s going to be a bumpy ride.

The game’s main feature is the Cascades. This mechanic pays for three to six matching symbols on adjacent reels from left to right. Every win triggers a Cascade which removes winning symbols from the grid while adding new ones. This means new winning combinations and a pair of extra positions on the involved reels. Each reel can expand up to eight positions, upping the number of winning ways to a maximum of 262,144.

This is the only feature in the base game, but considering how rewarding it is, who’d ask for more?

Three, four, or five Spartan Shields award five, seven, and ten free spins respectively. If you’re lucky enough to land six Shields, you get the Super Free Spins version. During the bonus, all wins involving the Wild are doubled. Scatters are also collected to upgrade the multiplier while awarding extra spins.

What’s the difference between the regular and Super Free Spins version? In the latter, the Warrior Wild is an x300 multiplier, with two, five, and twelve Scatters awarding extra spins only.

The RTP of the 300 Shields Mighty Ways slot has been set at a 95.99% and the volatility is high. We would have liked to see the RTP higher, but it is what it is. The good news is that the math model is more than decent. With a bit of luck and that Warrior going wild up to x300, you can win a total of 30,000x the bet.

300 Shields Mighty Ways is a roaring addition to the 300 slot franchise. Developed by Light & Wonder instead of NextGen, it comes with a few unique twists and turns that can take your wins sky-high. We loved the Super free spins version and the bonus’ overall winning potential, making it a slot that’s well worth your time and money.

The 300 Shields Mighty Ways online slot game was developed and published by Light & Wonder. It’s an up-and-coming studio with over 100 slots released so far. Its best-known games include Carnival Row Coin Combo, 88 Fortunes, and Endless Treasure.

How many paylines does the 300 Shields Mighty Ways online slot have?

The 300 Shields Mighty Ways slot doesn’t have traditional paylines. You start the game with 729 ways to win, but those can expand as you play and unlock more rows. The total number of ways to win is a whopping 262,144.

Yes, it is. Considering the amount of bonus features it has managed to cram into the math model, that’s not surprising. We wouldn’t say it’s extremely volatile, but caution is advised when playing for real money. Unless you can afford it, don’t max out your bets.

The 300 Shields Mighty Ways slot RTP is set to 95.99%. That’s right in line with highly volatile slots, although we would have loved to see it go higher. But we appreciate the fact it’s not lower, so it kind of fits the sweet spot.

No, it isn’t, although the Cascades can lead to such confusion. The slot uses the Mighty Ways mechanic which is similar to Megaways. However, it adds row expansions to the mix on each win, with a maximum of 8 symbols per reel instead of the regular 7 for Megaways titles.

What does the Super Free Spins Round in 300 Shields Mighty Ways do differently?

The Super Free Spins Round can be triggered by six Scatters, which rarely happens. During this version, you get the Super Wild Warrior maxed out as an x300 multiplier. The collected Scatters only add extra free spins to your tally.

How do I get the x300 Super Warrior Wild in 300 Shields Mighty Ways?

For this to happen, you’ll have to get to the bonus round with six triggering Scatters. Or collect twelve Scatters during the bonus, which will give you five extra spins and the x300 Warrior Wild. Both are pretty hard to get, but the winning potential is massive.

The Mighty Ways mechanic opens up a pair of spots on winning reels per Cascade. The maximum reel height is 8. If you manage to open up all reels, the number of ways to win goes up from 729 to 262,144, which makes the slot pretty rewarding.

What’s the maximum win I can score in 300 Shields Mighty Ways?

The maximum win you can score in this slot is 30,000x the bet. Light & Wonder has capped the winning amount to $250,000, which is still much more than what other slots offer. You’ll need plenty of luck for it, but at least you’re getting a shot.

When was the 300 Shields Mighty Ways slot released?